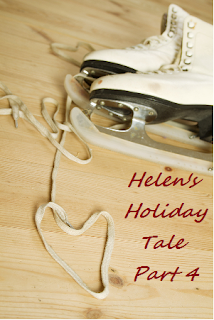 Welcome back to the final installment of Helen's Holiday Tale.
Part One can be found
Part Two
Part Three

“Mrs. Bakerson, I feel it’s my duty to tell you this may not be the best business decision. Cripple Creek has a skating rink. The pond freezes over and—”

“I know that darned pond freezes over!” Helen slapped her palm down on the lawyer’s desk, regretting it as pain shot through her arm. No matter. She was old. Whoopie. “It’s cold, though! And it can’t be used year round.”
“Your husband left you a lot of money, but—“
“Well, I didn’t ask you for your opinion, did I? Just get me the land and get me the workers and whatever else I need. I know the money is there. I haven’t spent hardly a dime the last ten years!” 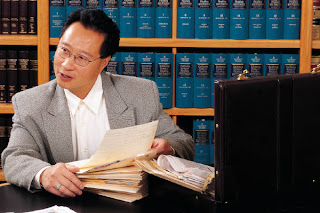 “All right, Mrs. Bakerson.” The lawyer waved his hands in a placating gesture. “Don’t have another heart attack. I’ll see to it, but it won’t happen overnight.”
Helen scoffed. “Just see to it, you young man.”
Jaw firm, mind set, Helen left the lawyer's office. It was a new year, a new chance. She was going to make the most of it.
***
Helen Bakerson sat on a front row spectator’s bench in Cripple Creek’s newest facility, the Bakerson Arena. It officially opened today for public skating, with every other hour given over to lessons from the experts she’d hired. Hockey teams could now practice and play regardless of the weather. Her George had so loved hockey. She wiped a silent tear from her face, secure in the knowledge that the next time her ticker gave out, she’d be with him.
George again. Even her will had been redone. Instead of going to the church, any funds available at her demise would be placed in trust to keep up the arena.
Her house, where she and George had lived and loved, would be turned into a youth hostel. She’d be taking care of ‘her kids’ from beyond the grave.
“Mrs. Bakerson, come skate with us!” Mindy reached for Helen’s hand. “Lucy will hold your other side so you don’t fall.”
“Oh, I don’t know, girls.” Helen smiled at the nine-year-olds. “I’m so old…”
“My mom says you’re only as old as you feel.”
“Well, when you put it that way…” Helen smiled and stood on shaky legs. She used her walker for support, but as soon as the little girls had hold of each of her hands, she left it behind and headed toward the ice. A crowd of people waited for her, reaching out to guide her. A chorus of “be careful, Mrs. Bakerson” rang in her wake. 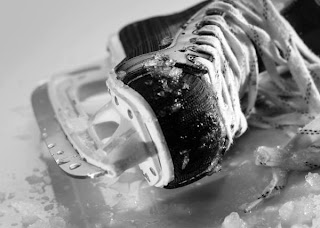 She already had skates on, though she’d had no intention of using them. It was all for show, but what the heck.
To her surprise, she actually slid across the ice. She wobbled at first, and many skating bystanders reached for her in fear she was going to fall, but she did it, thanks to Mindy and Lucy clutching her tightly.
Helen laughed as she glided, and the little girls tugged her into a slow circle. Briefly, for just a second, she thought she saw a man at the end of the rink, his dark slicked down and part at the side, a red scarf around his neck…
She sent him a silent message. I’ll be ready next time, George. Come back for me, you hear?
He smiled and nodded his head before sliding backward off the ice, only instead of disappearing altogether into the throng once he reached the stands, he simply became a blur and faded.
“Look, Mrs. Bakerson!” Mindy pointed to the ice, her girlish excitement contagious.
Helen complied, gasping in surprise. There, in the center of the ice, someone had etched a heart. Inside it was the name Helen.
“Wow. Someone has some mad skills, Mrs. Bakerson,” Lucy gushed in amazement.
“Indeed, they do, my child. I wonder who it was.”
I love you, too, George.

Thank you for joining me for this Holiday Tale. Have a great new year! Here's turning over new leaves. Remember...make the most of it. :)

If you liked Helen's Holiday Tale so much you want it on your kindle to read again, it is available on Smashwords in any format you may need, and better yet, you set the price.
Posted by Tara at 7:00 AM