The second installment of Helen's Holiday Tale. The first can be found here. 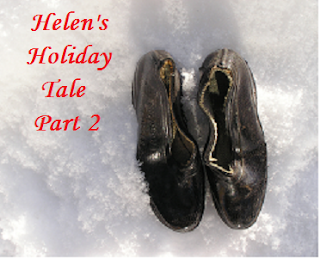 “Helen, Helen, get up, darling.” She felt hands grip her elbows and tug at the same time the male voice penetrated her consciousness. Helen gasped and opened her eyes, blinking at the sun glaring off whiteness all around her.
“Oh, my stars,” she declared as soon as she could breathe again. “I have no idea what happened to me there.”
When her eyes adjusted, she saw all the whiteness was snow. No big surprise there. Cripple Creek saw a lot of snowfall in December. But what was she doing outside? And why was her butt hurting?
“Get up, Helen. Skate with me.”

Come back tomorrow for more of Helen's story.
Posted by Tara at 7:00 AM