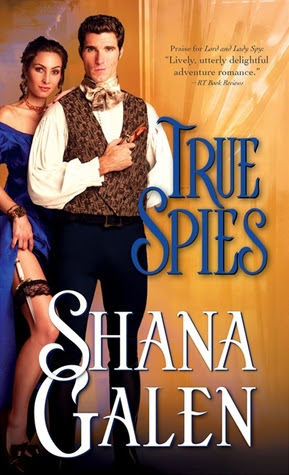 I enjoyed this light, humorous historical romance. Though the second in a series, it can stand alone.

Basic summary: he's a spy and has been hiding that little fact from his wife for all 14 years of their marriage. She feels unloved, unwanted, undesired, and like most housewives...bored. Her children are at that age they no longer need her constant supervision. When a man claiming to be a spy wishes to engage her in a love affair, she just loves feeling desired again and plans to enter this exciting life with the man...but then the husband finds out.

Based loosely on the movie True Lies.

I enjoyed the plot, though I didn't find it as intricate and exciting as book one. I liked this spunky heroine, how she stands up to her husband. I enjoyed their banter and arguments. I appreciated that she was a normal woman, with stretch marks and fullness to her body. Mr. and Mrs. Smythe from book one make enough appearances to please me. I really like those two. Blue...Blue is back and nearly steals the show a few times. I also liked how this story touches on--however lightly--a serious issue that most married couples face after a decade or so: boredom and taking each other for granted.

Sometimes we have to be reminded of what we have in order to appreciate it.

Oh--and you could say there's a theme of compromise. That's an important factor in a marriage and these two really brought that home, so to speak. COMPROMISE is a must.

The story is really really LOL funny toward the end...with the prince. OMG. I laughed out loud and had to cover my mouth as my husband was sleeping.

I'm also extremely excited about book three, which promises to have another woman spy. I can't wait! And I wonder what movie it will be loosely based on. I love this idea.

My quibbles: I can't help but compare it to book one, and I have to say, I don't see myself reading this again and I didn't find it as "unputdownable" as the first. Matter of fact, I didn't laugh my butt off till the end, but I liked it. However, though the ending was funny, some things didn't quite line up for me. Blue being afraid of tunnels, refusing to go in at first, but then hopping in a bit later? No....

The historical setting was well done. There was just enough of it to make me feel "there" but not so much that it became bogged in details. I'd say this story overall had the perfect blend of historicalness, romance, humor, banter, and suspense.