I met this author through #wwwblogs. I read her flight journal (mentioned below) and was just so impressed...This lady didn't just stick to YouTube videos and how-to manuals... She went out and learned to fly just to write it properly!!! Please, allow Cheryl Cooke Harrington to share her experience with you.

"One of the things I like most about being a writer is the way stories take off in the most unexpected directions. In the case of SPARKS FLY, that direction was up. My characters needed an airplane, so I needed to find out how to fly.

Videos like this one below can be incredibly helpful to an author trying to write authentically, but nothing tops hands-on experience. And so it was, one sunny, summer morning, I found myself counting down minutes in the café at Waterloo Regional Airport. My introductory lesson would start at noon. I was almost an hour early. I ordered coffee, found a table, shuffled through someone's left-behind newspaper, and tried not to panic. And then I panicked. Earthbound, height-phobic, bit-overweight me was about to go up in a two-seater Cessna.  Not just go up. I was going to fly the thing. What was I thinking?

I gulped hot coffee and told myself to get a grip. I could do this. After all, there would be a fully qualified pilot in the second seat. If I screwed up, she'd save us. Unless I screwed up really badly…

I wondered if the instructor would wear a parachute.

Just as my imagination had me and the Cessna spiralling to our doom, someone yelled, "Billy!"

The café cleared in an instant. Customers, wait staff, busboy, even the cook streamed through the door onto the observation deck beyond, sweeping me with them into dazzling sunlight and a deafening wall of sound: the shriek of an engine, pushed to its limit.

'Billy' was flying a fire-engine red biplane, a Pitts Special, according to the handsome pilot standing beside me. Guiding the little red plane through loops and rolls and dives, Billy would climb until the engine stalled, then fall earthward, spinning, silent... then do it all over again.

"She's a bit of a legend, our Billy" said the pilot, and I wondered aloud if they'd let me try that on my introductory flight.

Back inside, the handsome pilot joined me for coffee. His name was Dan and we talked about flying, and books, and the joy of living your dreams. Noon came swiftly. When the instructor called my name, I was ready to soar.

I've posted my flight diary and photos over on my blog, so come fly with me.  You know you want to." 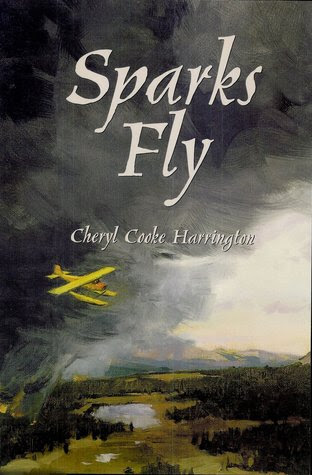 Blurb:
What happens when a thoroughly modern woman, longing to return to her roots, meets an old-fashioned hero on her first day home? Sparks Fly. And it doesn't take a forest fire, smoldering in the distance, to turn up the heat between high school science teacher Logan Paris and bush pilot Mitchell Walker.

Logan's dream of a bright future for her grandfather's lodge at remote Thembi Lake hits an unexpected snag when Gramps introduces the handsome pilot as his new partner. It seems that Mitch has plans of his own for Casey Lodge, and Logan is certain they don't include a partnership with a "city girl." Determined to prove herself and protect her heritage, Logan sets out to unravel the many mysteries of Mitch Walker. Where did he come from? Why is Gramps so willing to trust him with the future? And most disturbing of all ... what's she going to do about the undeniable attraction she feels whenever he's around?