Mixing Fact With Fiction. A Guest Post from JB Salsbury


I often get asked if the stories I’ve written have any personal tie-ins to my real life.

The quick answer is yes.

Although my husband isn’t a famous mixed martial arts fighter, and I don’t have an affinity for fixing up old cars, there are a lot of character traits and personal struggles that I infuse into my writing.

Every hero I’ve written so far has similar traits to my husband. I gave Jonah my husband’s tattoos as well as his lethally protective nature when it comes to his woman and his kids. Blake has a few lines in his book that came directly from my husbands mouth, one in particular that Layla responded to the exact same way I did when she said, “That’s the most romantic thing anyone has ever said to me”. Blake’s *secret* also belongs to the man I married.

And although the plots and twists are fictional there’s a bit of my life in every book I write. Raven’s anxiety, Layla’s outward strength that she uses to mask her insecurity, and even her hair twirling…all me.

There’s a scene at the end of Fighting to Forgive that takes place at The Blackout between Layla and Eve. I’m positive that interaction actually occurred between me and one of my best friends several times. The details are fuzzy.

Yes, I have a best friend that cannot say a curse word to save her life. When she does, it’s the most hilarious thing I’ve ever heard.

My teenage goddaughter is the Queen of the eye-roll “Whatever” that Elle showcases more than once in Fighting to Forgive.

And of course, the question you’re probably asking, is my dad really a pimp?

Yes. He’s the best book pimp I’ve ever had. Pushing my books on anyone who’ll stop long enough to listen.

As far as the people in my life who inspire the book’s villains? I’ll never tell. 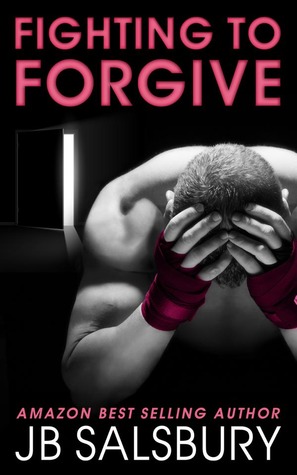 Blurb:
What do you do when everything you avoid, turns out to be exactly what you need?

Easy and predictable, just the way he likes it, Blake Daniels flies through life the way he burns through women: on his terms, no regrets.

With his fighting career in full swing, he's on the threshold of title contention. But when his training is compromised by injury, the stakes grow impossibly higher. The rage that fuels his punches also chips away at his focus, and he risks losing everything he cares about.

He won’t let that happen. Not again.

Layla’s through with men. After a marriage that never should’ve happened, she hopes to reclaim the pieces of the woman she lost years ago.

Emotional abuse has left her insecure and terrified. A master at faking what she’s not feeling, she masks her self-doubt in false confidence.

She’ll never let another man hurt her. Not again.

Chased by shadows of the past, Blake and Layla know what they don’t want, but their hearts have a different plan. As a web of lies and betrayal threatens to destroy them, they’re forced to make a choice.

Is love enough to heal even the deepest wounds?

Or will they be left Fighting to Forgive?

About the Author:
JB Salsbury lives in Phoenix, Arizona with her husband and two kids. She spends the majority of her day as a domestic engineer. But while she works through her daily chores, a world of battling alphas, budding romance, and impossible obstacles claws away at her subconscious, begging to be released to the page.

Her love of good storytelling led her to earn a degree in Media Communications. With her journalistic background, writing has always been at the forefront, and her love of romance prompted her to sink her free time into novel writing.

Fighting for Flight is her first novel in the MMA romance series.

For more information on the series or just to say hello, visit JB on facebook or goodreads.

New comments are not allowed.