I’m seeing in reviews that Sapient by Jerry Kaczmarowski has been shelved as a technological or medical thriller on Goodreads.  For me, it’s science fiction though it certainly has thriller elements.  I received this book from the author for free in return for this honest review. 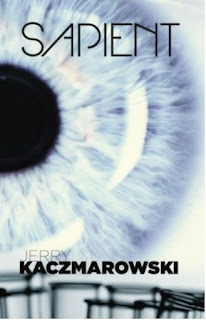 My biggest problem with this novel is that the research project in the book was supposed to be a cure for autism, and it was never fully explained why autistic individuals  would benefit.   As the book opens, we are shown that the intelligence of some animal subjects was increased by the virus that was being utilized in the study.  Why should this impact autism?  I wonder what the author believes about this condition. Autism isn't mental retardation.  Based on my own reading,  autism seems to represent a spectrum of variant brain organization. While a great number of people with autism are very impaired, some of them have remarkable skills and capabilities that they wouldn't have if they weren't autistic.  Not all of those who are autistic would want to be cured.   I question the premise of this novel.  Would an autism research program, presumably helmed by experts on autism, authorize this research and consider it a likely cure?

Then there's the totally reckless protagonist.  Dr. Jane Dixon knew very well that her research needed to be tested extensively and that it would take years before it would be approved as safe for humans.  She also ought to have known that the reasons why it takes so long are not arbitrary rules.  She didn't even know the long-term effects of the virus on the rats who were her original test subjects.    Yet she made a series of  foolish decisions that were professionally inexcusable.  Yes, she had an autistic son, but it seems to me that her behavior would have been much more forgivable if she had been completely ignorant of the possible consequences.  Since she did have a background in scientific protocols, I considered her as irresponsible toward her child as she'd been with her research.

It seems to me that woman scientists have enough trouble being taken seriously in their profession without a woman in science being portrayed in a novel as clueless and untrustworthy.  This is why I thought  Dr. Beth Thomas from the CDC was a more sympathetic character.  I completely understood her perspective and thought she was shabbily treated within the narrative.  Dr. Thomas recognized the risks, was motivated by a desire to protect the public and was probably more qualified to do Jane Dixon's research.

Another very likeable character was Bear, the dog who had just been brought into the study as the novel opened.  Bear was loyal, trustworthy and ultimately heroic.

The CDC wasn't the only American agency that was interested in what Jane Dixon was doing.  It turned out that the Pentagon was also interested.  Frankly,  I thought the intentions of the military for this project were quite horrific.  The author didn't explore the ethics of the Pentagon's intentions at all.  If I were the protagonist, I would have wanted to protect any future canine research subjects from the military's  plans for them.

The Pentagon's representative, Jim Rogers, was probably intended to be likeable.  He did have characteristics that made him seem appealing , but I thought that his ethical compass with regard to the treatment of animals was extremely off-kilter.

There is a romance sub-plot and a HEA ending for that romance.  The resolution for the research project, however, was very disturbing to me.  In the end, no one was considering the possibility that the virus could still mutate, and that there might be massively unforeseen consequences.   I don't even want to think about the potential dystopian chain of events that could develop.

I didn't hate Sapient, but I did think that there were some very sizable improbabilities involved in the concept, the plot and the characterization of the protagonist.  This book didn't work for me.