Rock With Wings by Anne Hillerman

I'm one of those people who continues to read a series that's been taken over by another writer after the death of the original author if I liked the series.  I sometimes think that the new writer is an improvement.

Anne Hillerman, the daughter of Tony Hillerman, is an improvement when she writes the perspective of Jim Chee's wife, Bernadette Manuelito.   Bernie, as everyone calls her, is a Navajo Tribal Police officer like her husband.  As a feminist,  I'm always hoping to see a woman officer being portrayed as the equal of male officers in police procedurals.  Most police procedurals have male protagonists. That's why I've been pleased by Anne Hillerman's primary focus on Bernie's perspective. 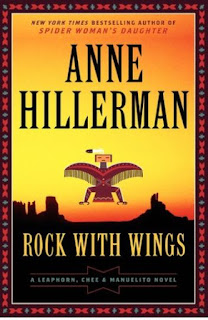 One of the problems that I had with this book is that it seemed to me that Chief Largo was deliberately giving Bernie minor cases while Jim Chee got the high profile action.  I think that the Chief was trying to protect Bernie, but she ended up in a dangerous situation anyway and acquitted herself well.  So Anne Hillerman was really showing that Bernie could handle danger, but I was impatient with all the minor cases that got piled on Bernie.

I also disliked the fact that Anne Hillerman felt the need to pander to the popularity of zombies.  The case that Jim Chee was investigating involved all sorts of illegalities surrounding the making of a zombie movie in Monument Valley.

The associate producer of this movie philosophizes about horror movies saying that "When things go haywire, it's nice to have something to blame that's out of our control."  He thinks this explains the popularity of horror movies. I've always thought that the main appeal of horror is the demonizing of difference.  Horror makes it OK to hate beings who are different because in horror they're always monsters.    I'm absolutely not a fan of the genre.

So Anne Hillerman brings zombies into Navajo country.  Traditional Navajos would consider zombies a type of chindi.   Chindis are the spirits of the dead.  The traditional Navajo fear them, consider anything that has been touched or associated with the dead polluted, and avoid mentioning the names of any dead individuals.  In the Navajo religion, it's believed that mentioning the names of dead people summons their chindis.  I would have thought that there would have been some objection from traditional Navajos to the theme of the movie, but apparently the money that the film industry brings is too good to pass up.  When Chee discovers a grave in Monument Valley which would pollute it with  actual chindis (rather than fictional ones), that does become a matter of deep concern to Navajo authorities.

Bernie's most important case ,which started out with her pulling over a speeding motorist, turned out to deal with solar energy.  I'm not sure about the politics of this author on the subject of climate change, but this novel surrounds the solar industry and the use of solar power on the Navajo reservation with all sorts of negativity.  There are extremely unscrupulous individuals using coercion to get people signed up for the installation of solar panels on their property.  There are malfunctioning solar panels and a Navajo elder who objects to solar panels.  He is coming from the perspective of someone who has never had electricity in his home.  This character believes that part of hozho, which is the Navajo concept of harmony,  involves living in a natural way.  He gets up at dawn and goes to bed when it becomes dark. According to this outlook, people who incorporate artificial light in their lifestyle are living out of balance with nature.  It's an interesting viewpoint, but  in my opinion those of us who want to continue utilizing artificial light really need to find a clean renewable source of energy like solar.  I find it troubling that in Rock With Wings the only characters who talk about the benefits of solar energy should be indicted.

I'm interested in reading about opinions other than my own, but my idea of balance is that ideally all perspectives should be fairly represented in both fiction and real life.

Rock With Wings contains some moments of wonderful characterization and deals with one of my favorite American landscapes, but I'd rather not read about zombie movies. I'd also prefer to see a more even-handed presentation of the issue of solar energy.