If The Oceans Were Ink: The American Woman Journalist and the Islamic Scholar


American journalist Carla Power has had an ongoing friendship with Mohammed Akram Nadwi, an Islamic scholar who teaches in the Islamic Studies program at Oxford University.  Power calls him Akram since Nadwi is the name of the school where he studied Islamic law.  She is a secularist whose parents also didn't practice the religions in which they had been brought up.   I wanted to find out about why Carla Power wanted to explore Islam when she wasn't religiously oriented. 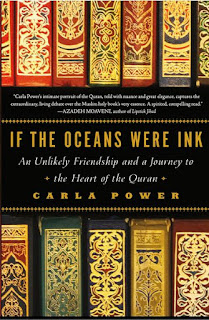 After having read the memoir she’s written about her friendship with Akram and her study of the Koran with him, I think that Power wants to be reassured about Islam.

Akram preaches against involvement in politics.  He also respects women.  He said to Power that women’s scholarship is purer than men’s because they aren’t paid for it.  Their only motivation is spiritual.   This is why he was motivated to write The Women Scholars of Islam which is a forty volume study.  Only the introduction has been published.  His publishers are seeking funding for the remaining thirty nine volumes.  I wanted to know more about these women, but only a few of them are even mentioned in this book which is disappointing.

Let me give one example.  Akram spoke at a mosque in England about what the Koran has to say about the Virgin Mary who is called Maryam in Islam.  He said that she was called to serve at the Jewish Temple.  He implies that she was a priestess of some sort.  From a woman’s spirituality perspective, this is a lovely story.  From a historical perspective, it couldn’t have happened.   It isn’t just a matter of women’s status in Biblical times, or the fact that Mary didn’t belong to a priestly family.  Jews had prophetesses, but no priestesses.  The reason is that priestesses are associated with Pagan religions.   Jews wanted to avoid any similarity to the practices of Pagans.  When you add in the element that Mary became pregnant out of wedlock, then you have a reminder of the Sacred Prostitutes of Astarte.  Islam has also tried to avoid any practices similar to the pre-Islamic religions of Arabia.  So they should understand why Jews might consider this idea that Mary was a priestess in the Jewish Temple rather offensive.   Akram said that the Koran wanted to honor Mary.  Perhaps the intention was to show that her virginity was protected in a sacred place, so it couldn’t be that Mary became pregnant as a result of sex.  Neither the Koran’s version nor the New Testament version of the story of Mary could be considered sex positive, but I would love to see a variorum edition which shows each Bible story and its Koran equivalent side by side.

Power is also a friend of Akram’s family and devotes a great deal of space to his daughter Sumaiya.  As an indicator that Sumaiya made her own decisions, Power tells us that Sumaiya went against her father’s opposition to dying her hair.  She consulted another Muslim scholar who gave her a fatwa (which means an opinion on Islamic law) that hair dying is permissible, and she proceeded to dye her hair.  This also shows that Islamic scholars aren’t united in their interpretations.

There is a bibliography at the end of this book which includes the first volume of Akram’s study on Islamic woman scholars which I would like to read as well as such books as Progressive Muslims: On Justice, Gender and Pluralism edited by Omid Safi and Inside The Gender Jihad by feminist Amina Wadud.

Unfortunately, If The Oceans Were Ink is not as interesting or insightful as I had hoped.  My feeling is that a secularist like Power, without any religious background, probably won’t ever have an in-depth understanding of Islam.