Gender Bias in Mystery and Romance Publishing by Anna Faktorovich


This is an academic study, but I thought I would try asking myself what a general reader would want to know about this book.  I reviewed The Romances of George Sand by Anna Faktorovich on Book Babe.  I also interviewed her.  More recently, I received a free copy of Gender Bias in Mystery and Romance Novel Publishing from the author in return for an honest review. 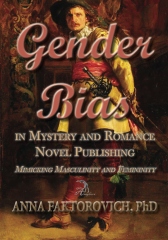 First, I’d like to discuss what Faktorovich did right from the perspective of general non-academic readers.

1) She was honest about the fact that she usually didn’t read these genres, and didn’t portray herself as an authority about them.
2) She selected both 19th century and 20th century writers in each genre so that long-term trends could be identified.
3) She showed that in the mysteries she studied, authors of both genders tended to be disturbingly sexist in their character portrayals.  In fact, I read the results as showing that mysteries are more sexist than romances because women in most of the romances she studied are active characters, and romance tends to portray the male and female protagonists as having equal social and professional status.
4) She was willing to consider the idea that erotic romances might be explorations of women’s sexuality and could have a feminist impact for authors and readers.
5) She included short biographies of authors that contained interesting facts about their lives which aren’t well known.

Now I’d like to enumerate some serious flaws in this book.

1) She chose mysteries as the most male dominated genre.   Actually, science fiction is more male dominated.
2) She had outdated notions of both the mystery and romance genres.  Both genres have developed in directions that weren’t addressed in this study.
3)  She was completely unaware of mystery sub-genres.  The cozy and paranormal mystery sub-genres which are dominated by female authors would have been particularly relevant to this study.
4) She biased the sample of her survey by mainly distributing it on listservs for educators or librarians.

Although this was an interesting book, Faktorovich missed a great deal in her exploration of these genres.