I haven't read many of Anne Perry's Victorian mysteries.  In fact, I've only read two since I joined Goodreads in 2008.   The Victorian period isn't my favorite.  Victorian ideas about respectability and class snobbery tend to annoy me.  Yet the first wave of modern feminism began during this period.  So I keep my eye out for Victorian titles that involve women speaking up for themselves.

The Angel Court Affair attracted my attention because it deals with the disappearance of a woman preacher who was considered blasphemous. Since religion interests me,  I wanted to find out what she believed and why people thought it was blasphemy. 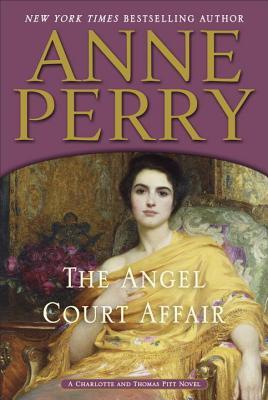 Sofia Delacruz, the character who caused so much controversy, was an Englishwoman who escaped an arranged marriage and re-emerged in Spain as a religious leader with a small following.  Based on my research into the history of Christianity, it seemed to me that what she preached had some similarities to the Christian ideal of Imitatio Christi or Imitation of Christ.  In the medieval period this was known as the path of the saints because it was too demanding for ordinary people.  Sofia Delacruz firmly believed that everyone could follow that path.  Her most controversial statement was that God was once like us.  To me, this seemed to refer to the Christian doctrine of the Incarnation.  Jesus became flesh and lived a human life.  The Christian Gospels depict this human lifetime.  So I didn't find this particularly controversial myself, but perhaps Victorians didn't like to think of the implications of Christianity.  Proposing that God was once human, or that humans could become like God disrupted the rigid hierarchies that pervaded Victorian culture.  There were hierarchies of age, gender,class and race.  People weren't allowed to "get above themselves" and it was downright subversive to encourage people to dream of becoming more than they were.

The political world was also described as in a state of ferment in this novel.  The United States had recently declared war on Spain. The British authorities feared anarchism and foreign invasion.   Interestingly enough, there was a reference to an  alternate history short story first published in 1871  in which Germany conquered England called The Battle of Dorking  by George Chesney.  You can read it for free on Project Gutenberg Australia here .

Yet what about the mystery?  The mystery case itself seemed rather familiar and even predictable.  This is part of the Thomas and Charlotte Pitt series, and I hoped that Charlotte would play a more active role.  Charlotte and the Pitts' teenage daughter, Jemima, did express their views about Sofia Delacruz. There is also a mention of Charlotte's secret participation in the women's suffrage movement which I appreciated, but most of the investigation was performed by men.

I also noticed the double standard about extra-marital affairs which were routine for men, but scandalous for women.  The reputation of a woman could be destroyed by such an affair, but there were no repercussions for men.  This double standard continues  in contemporary society,  so it shouldn't be news to readers.  Yet I still found it infuriating.

The Angel Court Affair isn't recommended for those readers who feel a sentimental nostalgia for Victorianism.  This is a sharply observed realistic view of Victorian society.  Anne Perry depicts it as a culture poised on the brink of change.