Tidewater: Can There Be An Authentic Pocahontas Novel?

I am one of the many people who loves and cherishes the mythical Pocahontas.  In fact, I played Pocahontas in a Thanksgiving play in elementary school.  This was long before she became the subject of a Disney movie, by the way.  Disney didn't invent the legendary Pocahontas.  Disney didn't even popularize the story.  Pocahontas became a popular legend during her own lifetime.  She achieved celebrity status and was the darling of London society when she was barely out of her adolescence.

It was Paula Gunn Allen's biography, Pocahontas: Medicine Woman, Spy, Entrepreneur, Diplomat that caused me to re-examine the myth.  Allen was a Native American author who sought to revolutionize the way history is written. She wrote her biography in such a way that she could include speculation and imaginative re-creation of events in the manner of historical fiction.

This leads me to Tidewater by Libbie Hawker.  I think that if Hawker included a list of the roles that Pocahontas played in the title of her novel as Allen did, it would be rather different.  Perhaps her title would read Jester,Linguist,Political Adviser and Spy.  The only thing that Hawker and Allen would agree on is that Pocahontas was a spy.  It seems to me that every author who has written about Pocahontas has their own version of her. 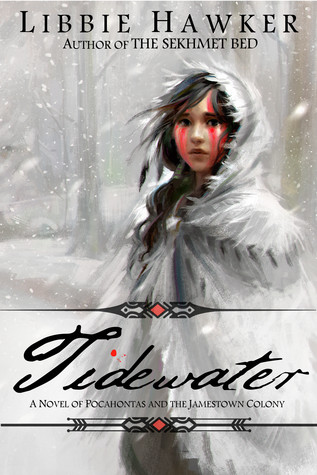 It's important to realize that we don't have any contemporary account of Pocahontas written by her.  It would have been theoretically possible for Pocahontas to have kept a diary after John Rolfe taught her to read and write in English, but I think she was too busy living her life to write about it.  The only contemporary account that we have is the one that catapulted her to the 17th century equivalent of superstar status.  It was authored by John Smith.    Keep in mind, that this was a man who made his living by writing self-aggrandizing memoirs.   He was neither the first nor the last writer whose career centered on inventing himself.  Can we believe anything that he wrote?  In her author's note, Hawker wrote that she found Smith sympathetic and selectively credible.   Unfortunately, it's difficult to decide what is truth and what has been concocted by the author to make him look good when there is only one source available.    It comes down to individual judgment and preference.  Both of these involve subjectivity.  This is how we can have different versions of Pocahontas that are all completely valid.  We don't really know the truth about her.

I believe that when you are writing any kind of fiction you need to tell a good story about characters who the readers will consider interesting and plausible.  When you are writing fiction about a historical personage, you are constrained by what can be definitely known.  We do know the birth and death dates of Pocahontas.  If Pocahontas was a child when she first encountered John Smith, as seems to be the case,  it is not plausible that she would have fallen in love with him.  This is why Libbie Hawker didn't give us a Pocahontas who was motivated by romantic feelings toward Smith even though it certainly does make a good story.

Is Hawker's Pocahontas interesting?  She is complex, but not always sympathetic.  I included political adviser in the list of Pocahontas' roles in this book even though she made some poor recommendations.  She was too young to have mature judgment and she was trying too hard to be influential.  Ambition was her most significant flaw.  As she grew older, she came to understand that  ambition had caused her to make some serious mistakes.  Unfortunately, this didn't stop her from making more of them.  She was blinded by her desire for recognition.

Hawker believes that Pocahontas showed John Rolfe how to grow tobacco successfully in Virginia's climate.  If she married Rolfe for the sake of her people as she claimed in this novel, then that sort of assistance was another serious error. This was a colony that was established for profit. Pocahontas apparently wasn't aware that the colony hadn't produced anything that gave the Virginia Company any return on their investment.  If  John Rolfe hadn't successfully grown a profitable strain of tobacco, it's very possible that the colony would have been terminated and the Powhatan Confederacy might have ceased to have an English problem--for that generation at least.

I think that Tidewater is a good novel that's well-plotted with memorable characters.  Though I do wish that Paula Gunn Allen had decided to write a novel about Pocahontas instead of her non-traditional biography.  Then we would have had two compelling fictional versions of Pocahontas that contravene the myth.