The Countess of Bathory: Book Comparison 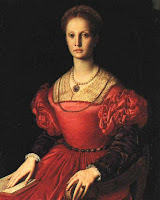 Picture of the real Countess of Bathory.. She was really quite pretty.

A recent release by Rebecca Johns is the most recent of the Countess of Bathory books I have read.  Sadly, it only warrants a two star rating.  It was boring.  It could be about ANY woman living in 1600s Hungary.  There is none of the depravity that the Countess went down in history for.  Though I respect that the author was attempting to portray her in a sympathetic light, that is not what people want when they pick up a book about Elizabeth Bathory.  She doesn't do anything appalling until halfway thru the novel.  (Pours honey on a servant and allows her to be devoured by bugs.)  She does not marry until almost Part II and three childbirths, the plague, the loss of 2 children, and ten years of marriage is summed up in a mere three or four paragraphs.  This was simply a disappointment. I will say, however, the first person narrative was well done.  I liked the style of it. Thankfully, it was an ARC given to me by a friend.

The second Countess of Bathory book which warranted a three star rating from me is Bathory: Memoir of a Countess by A. Mordeaux. I read this in April of 2009 and rated it a 3. Here is the review: This novel is certainly not for the easily offended or faint of heart. The murder scenes are gorey and violent and the sex is rather perverted.. and there is a lot of it. I think there was more sex than murder which says a lot considering the Countess of Bathory supposedly murdered 600 or more people. This novel begins with her as a young girl (I am unsure of age as she is sleeping on her nanny's bossum one moment and the next she is losing her virginity) and all around her there is violence. Her father, mother, brother, everybody except servants is killing, raping, or torturing someone. Even as a young girl, the Countess seems to enjoy it tho. She marries and graduates into the same vile behavior. However, she begins to murder "noble" girls instead of just servant girls, leading to her eventual imprisonment. She had an obsession with growing old and was jealous of young girls and if this book is to believed, she had an extensive and varied sexual appetite.  Thus, whereas The Countess had too little depravity consiering the subject, this one had too much.

The third Countess of Bathory book and the winner in my opinion (rating a 5) is Dandelions in the Garden by Charlie Courtland. Much thanks to Charlie for providing me with a copy in order to do this comparison. And I can honestly say, the book is wonderful. (I AM NOT JUST SAYING THAT CAUSE THE AUTHOR WAS KIND. TOTALLY UNBIASED REVIEWS HERE!) When I first started reading this novel, my first thought was, "This doesn't feel like the 1600s." And it didn't. The narrator, Amara has a very modern way of thinking and speaking, and I found myself wondering if they really had tabloids and chiming clocks that far back. Once the story went back to the late 1500s however, I became so engrossed in two little girls growing up together and experiencing their first loves, first kisses, first broken hearts, and first forrays into rebellion that I completely forgot about possible lack of historical authenticity and just sat back and enjoyed a very good story.

Amara and Elizabeth grow up together rather neglected and have little to no experience with the world outside their domain. They have a governess and pretty much run free and get into trouble. And what kind of trouble do most teenage girls get into? They fall in love. The problem is Elizebeth is not just any ordinary teenage girl, but the countess of Bathory and her marriage to a Count has been arranged. Despite her attempts, she is unable to avoid marrying the "harry ogre" and try she does! Elizabeth has shown a fiery side even before her wedding day and on her wedding night, she finds a new power within herself: the power to get her way. There is no stopping her from that point on. Is Elizabeth evil? She does some bad things, but I wouldn't say she is evil.. not in this take on her life. She simply DOES what we all THINK about, but don't have the courage to do. When servants gossip behind her back, she not only stops it, but ensures it doesn't happen again. Is she sexually promiscuous? Yes, but she desires to CHOOSE her lovers, not bed the man other's chose for her. And honestly, there isn't a woman in this world that doesn't desire to kill the woman that steals her man...

The book is mostly about Amara tho. Amara is a delightful narrator, full of charm and wit. Amara experiences spurned love of her own while growing up in the Countess's shadow. However, when a knight named Draco enters the picture, she has a chance at happiness. BUT, throwing daggers at fence posts and declaring that it is his head is NOT the way to a man's heart! LOL

I have two minor quibbles. 1. Upon first marrying Francis, Elizabeth's main goal in life was to keep him out of her bed. It obviously happened sometime tho and as perverted as everyone is going to think I am, I wanted to know when that came about. She made so much ado about it... so what made her finally give in? Towards the end of the novel, I said, "What?? When did she give up that fight? Did I accidentally miss a paragraph somewhere?" (And NO, I did not skip or skim.) Then again, perhaps Amara is simply not privy to everything. 2. There is a fabulous and exciting rescue scene involving both Elizabeth and Amara dressing up as Turks. For some reason, this was told by the "modern" day Amara, rather than being part of the real story. I would have liked to EXPERIENCE this scene more.

Neither of those two quibbles prevented me from thoroughly enjoying this novel tho. I could not put it down. I was absolutely delighted with it and laughed and smiled throughout the entire reading of it.   The sequel makes a fine conclusion.  See Review: http://wwwbookbabe.blogspot.com/2010/09/hidden-will-of-dragon-countess-of.html 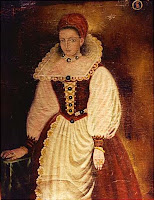 An oil painting of the real Countess of Bathory.