Interred (Chronicles of the Interred #1)
by
Marilyn Almodóvar

The cover was created by the amazing Devan Edwards of Nimbi Designs. 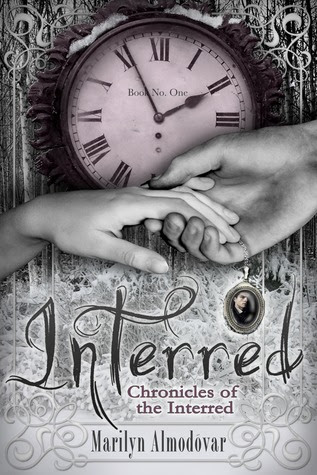 Time has never been an issue for Baxter Jacobs, but then she never knew she had the ability to Bend it.
As her sixteenth birthday approaches, Baxter inherits a pendant that will change her life. Connected to the pendant is a dark and mysterious young man named Declan Ashdown. Trapped in a Time loop for the past 122 years, Declan needs Baxter’s help to escape. The only problem is, she has no idea how to do it.
To acquire the power she needs to free him, she’ll become one of the Interred, those whose Magical abilities emerge as they come of age. When she does, she’ll discover that Declan isn’t the only one interested in the fact that she’s a Time Bender.
As the Interment arrives, Baxter knows this will be no Sweet Sixteen. A vengeful relative and the ruthless Council are determined to control her. Declan’s powerful and charming descendant, Jack Ashdown, claims he can save her. She’ll soon have to decide who she can trust, and how to master her new abilities before Time runs out.
Published by Iambe Books on January 22, 2013
Add it to your to-read list on Goodreads

My thoughts: Will def appeal to YA readers. The heroine is likable, yet has just enough imperfection to make her realistic, minus all that teen angst you usually find in a YA book. There's nothing cliqued or overdone about it. The time bending, the Warriors, the idea of being buried alive, the mystery surrounding her mother keep a reader on the edge of the seat. This being only my second foray into YA Fantasy, I confess I was confused more often than not. The glimmer ages...yet the glimmer surrounds Declan, the boy trapped in the stone and the heroine's helper, so why is it he could touch her at times but not others? Little things confused me as well as the time bending and magical group itself, BUT I must add that the heroine is just as confused, so in the end it was as though we were confused WITH the heroine and that worked. If she doesn't know the 411, how can we? ;)

A good, solid, entertaining read, that above all is unique. The author has a terrific imagination. 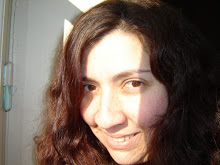 Marilyn Almodóvar is the author of a series of YA paranormal novels. Born in Ft. Huachuca, Arizona, Lyn is a lover of words whose reading tastes range from Victorian novels to the books of Stephen King. Her favorite past-times have always been reading and writing, two activities that let her escape to other worlds.


It was this love that propelled her to choose Theater and French as majors in University, with a minor in English Victorian Literature. Lyn lived for almost a decade in England followed by three years in France before returning home to the States. A self-confessed citizen of the world, she is fluent in English, French and Spanish, with basic knowledge of the Italian language.


Lyn could happily exist breathing the clean air of Narnia, trapped in a cupboard under the stairs with Harry, fighting alongside Captain Jack Sparrow, doing an internship in Torchwood, or traveling around time and space with the Doctor…as long as she can have Mr. Spock, Captain Kirk and Captain Mal as companions.
Lyn currently lives in Central Florida with her French husband, English-born eldest son, and French-born youngest son. Her debut YA Novel, Interred, was published by Iambe Books on 01/22/2013. Fissure (Chronicles of the Interred #2) is scheduled for release on 06/22/2013.


Ways readers can connect with Lyn:


~     ~     ~
Don’t miss out on the great giveaway (open internationally)! You could win a signed paperback, autographed tote bag, a pendant and pin inspired by the book, and lots more!