Freaks-- A Steampunk Adventure Written For Children With Unusual Protagonists

There came a point in my life when I stopped worrying about the age of the intended audience for a book.  After all, when it comes to books written for adults my biggest concern is the content.  So if a book contains content that interests me there could be a strong possibility that I would like it even though it was written for young adults or children.   It turned out that I was correct.  Some of my favorite books in previous years were YA novels.  I hadn't found any children's novels that I considered potential favorites until this year.

I am a fan of circus fiction. I recently read and loved Wild Boy by Rob Lloyd Jones, a children's novel about a Victorian circus freak with amazing deductive abilities that allow him to solve mysteries with the help of a girl who is a tightrope walker.   Goodreads told me that people who were interested in Wild Boy also had viewed the page for this  novel,  Freaks by Kieran Larwood, a children's Victorian steampunk science fantasy with a girl protagonist. 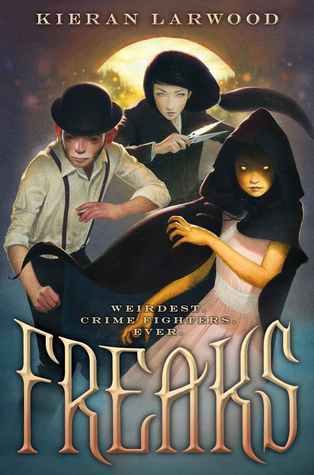 The main viewpoint character of this novel is Sheba, the Wolf Girl.  She was sold to a succession of freak shows because she's very hairy, but she also has an unusually keen sense of smell that makes her a superb tracker. As Freaks opens, Sheba doesn't remember a life before freak shows.   She is terribly lonely, and is delighted to join a larger freak show where she has friends her own age.  These are Sister Moon and Monkey Boy.  Sister Moon is Japanese, dresses like a boy and has ninja skills.  My feeling is that the narrow prejudices of Victorian England would have consigned Sister Moon to the fate of a freak to be put on display simply because she's Asian, but her departures from conventional sex roles would have sealed the deal.  Monkey Boy has a tail and is an excellent climber.

It may occur to readers of this review that these three unusual children would make an impressive team.   Those who are fans of comic books will be delighted to learn that they do. When children from London's poor begin disappearing,  the police aren't interested.  The general public scoffs at the talk of monsters emerging from the muck, and seizing the unwary.  So the members of this freak show become vigilantes whose goals are to discover what happened to the lost children and to rescue them. The group includes adults and animals who make significant contributions.  I particularly liked Mama Rat with her troupe of smart performing rodents.

Anyone who was ever called a "freak" in school is aware of the negative and hurtful connotation of this word.  Some choose to reclaim the word and give it a positive connotation.  Kieran Larwood's decision, despite the title, is to refer to the protagonists as "peculiars".  This seems consistent with the Victorian milieu, and with the English propensity for understatement.  I am comfortable with this choice, though I would also be happy with the main characters discovering that they are proud to identify as "freaks".  I believe that people should be able to call themselves whatever empowers them.

Some of my reviews deal with discussion of genre.  This book definitely belongs to the steampunk sub-genre.  Steampunk fiction takes place in an alternate universe dominated by steam technology.  They usually contain inventions that run on steam and often take place during the Victorian period.  For the overwhelming majority of this book I was convinced that this book was also science fiction, but toward the end of the novel an event occurs that can't be explained by science.  It changed my categorization of Freaks to science fantasy.  This fantasy element also altered my view of Sheba, the protagonist.

I ended up liking the author's set of character drawings with entertaining captions that appears after the text of the novel. I'd imagine that Freaks could be very successful as a graphic novel.

I appreciated the Author's Note dealing with the historical aspect of this book which was illustrated with photographs. The author makes certain that his readers know that a device which was important to the plot of Freaks was entirely fictional even though Larwood credited it to the historical scientist, Michael Faraday within his novel.  As a circus fan, I was particularly interested in the poster of  the "Chinese Goliath", a man who was nearly eight feet tall exhibited by P. T. Barnum.  I wanted to know something about this tall man's life, and found an article from 1893 called The Gentle Giant .

I had to overcome my prejudice against silly names in children's literature in order to enjoy this novel.  Readers will probably infer that I am not a fan of Harry Potter, and you would be quite right in that assumption.  I normally shudder when I encounter characters with names such as Grunchgirdle  and Plumpscuttle, close the book and never read another word between those two covers.   Yet I had become invested enough in Sheba that I needed to know what happened to her.  So I continued reading, and my persistence was rewarded with an engaging and original tale.