The Shepherdess of Siena by Linda Lafferty 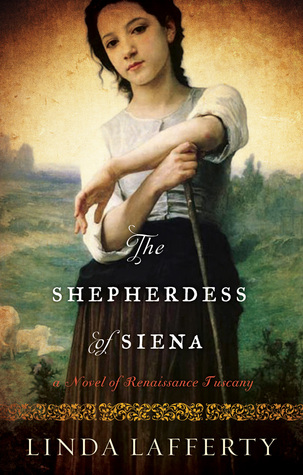 It took me a bit to make the connection, but I've read about the crazy Medicis before, in Elizabeth Loupas's The Red Lily Crown. Once I realized who I was reading about and began "recognizing" events, such as the murdering of wives and the alchemy, I could not help but compare the two novels.

Both novels educated us about the Medicis through the eyes of strong women of the times: Loupas gave us a female chemist; Lafferty gives us a lady jockey. Both were considered shocking and unusual during this time period.

As far as heroines go, I prefer this feisty girl jockey. She's a shepherdess who loves horses, has a unity with them, is determined to be the first girl to run the Palio--a race. And this isn't just running in a circle, but through town full of obstacles, sharp turns, people with whips and very little rules.

This young girl who has never rode before suddenly declares she's going to not only race in, but win, the Palio and her determination very nearly gets her there. It's never too late to chase a dream. I also took away from this a moral: it's not really about winning. You don't have to make first place to "win". It's about determination and passion for what you are doing.

So she becomes the heroine of Siena...meanwhile, the Medicis are poisoning each other. First it's the sisters, then it's the granduca himself...and there's magical paint. And then it seems like Virginia Tacci, heroine of Siena, is fated to a life in "prison". Will anyone be able to release her? And once released, will she want to be free?

I said above, I preferred this heroine, but as far as writing goes and the Medici plotline, I prefer Loupas's writing and interpretation. I didn't find myself as engrossed with the Medicis' lives and scandal and disputes in this one as I did with Loupas's novel, probably because Virginia herself never really deals with them. So the two stories are not as entwined and it was jarring at times to go from one setting to another. Without the likable heroine connecting it all, I began to lose interest.

When it was Virginia talking--first person, her POV--I was happy. When it went to the Medicis or the painters or any other character, I was not as engrossed. I confess to moments of boredom. The Medici story simply did not appeal to me as much as Virginia's story.

But what a courageous heroine--her determination, her passion only for horses, her riding astride and refusal to dress as a boy because she is proud to be a girl. Her insistence on a feminine version of the word jockey. She's terrific and an inspiration. Had the story just been about her, I'd have been happier. Though I did take away some new knowledge from this, such as the siege/starvation of Siena. I did not know about that.