Spotted on NG and as Sourcebooks Landmark is one of my all-time favorite publishers, I must get my hands on The Girl Who Wrote in Silk by Kelli Estes.

The smallest items can hold centuries of secrets...

Inara Erickson is exploring her deceased aunt's island estate when she finds an elaborately stitched piece of fabric hidden in the house. As she peels back layer upon layer of the secrets it holds, Inara's life becomes interwoven with that of Mei Lein, a young Chinese girl mysteriously driven from her home a century before. Through the stories Mei Lein tells in silk, Inara uncovers a tragic truth that will shake her family to its core — and force her to make an impossible choice.

Inspired by true events, Kelli Estes's brilliant and atmospheric debut serves as a poignant tale of two women determined to do the right thing, and the power of our own stories.

Spotted on Goodreads Giveaways and caught my interest...Flower Girl by David Marshall Hunt.

What happens when a scientist with top secret clearance and a rogue CIA agent join forces, and he happens to be her father?

As a kidnapped orphan she hires out as a flower girl on Cheju-do Island, Korea the honeymoon capital of Asia. At 12 she is rescued from being sold as a child bride. Her rescuer is a rogue CIA Agent, who happens to be her father, who returns her to the USA to get an education. At 26 she is a scientist and linguist with a top secret clearance working for a government contractor when her rogue agent father suggests that they start a family business as assassins for hire. An unexpected turn of events on an assignment sends them back to Cheju-do where she is faced with the difficult choice of service to family and community or revenge.
"To start a family business you first need a family." Hunt (circa 1990)
A novel of mystery, adventure, and discovery, with a touch of whimsy, where past meets present as an atypical family comes together and learns about themselves while learning to trust each other as they start up an unusual and dangerous family business.

Spotted on Shelf Awareness, The Distant Marvels by Chantel Acevedo made the list.

Maria Sirena tells stories. She does it for money—she was a favorite in the cigar factory where she worked as a lettora—and for love, spinning gossamer tales out of her own past for the benefit of friends, neighbors, and family. But now, like a modern-day Scheherazade, she will be asked to tell one last story so that eight women can keep both hope and themselves alive.

Cuba, 1963. Hurricane Flora, one of the deadliest hurricanes in recorded history, is bearing down on the island. Seven women have been forcibly evacuated from their homes and herded into the former governor’s mansion, where they are watched over by another woman, a young soldier of Castro’s new Cuba named Ofelia. Outside the storm is raging and the floodwaters are rising. In a single room on the top floor of the governor’s mansion, Maria Sirena begins to tell the incredible story of her childhood during Cuba’s Third War of Independence; of her father Augustin, a ferocious rebel; of her mother, Lulu, an astonishing woman who fought, loved, dreamed, and suffered as fiercely as her husband. Stories, however, have a way of taking on a life of their own, and transported by her story’s momentum, Maria Sirena will reveal more about herself than she or anyone ever expected.

Hover by Anne A. Wilson, penned by a former Navy pilot, has made the women-in-aviation list as well as wishlist. I spotted it on Netgalley, but they're only offering an excerpt.

Helicopter pilot Lt. Sara Denning joins a Navy battle group with little fanfare—and that’s just the way she likes it. After her brother Ian’s tragic death, her career path seemed obvious: step into his shoes and join the Naval Academy, despite her fear of water. Sara’s philosophy is simple—blend in, be competent, and above all, never do anything to stand out as a woman in a man’s world.

Somewhere along the way, Sara lost herself—her feminine, easygoing soul is now buried under so many defensive layers, she can’t reach it anymore.

When she meets strong, self-assured Lt. Eric Marxen, her defenses start to falter. Eric coordinates flight operations for a Navy SEAL team that requests Sara as the exclusive pilot. This blatant show of favoritism causes conflict with the other pilots; Sara's sexist boss seems intent on making her life miserable, and her roommate and best friend, the only other woman on the ship, is avoiding her. It doesn’t help that her interactions with Eric leave her reeling.

The endgame of the SEALs' mission is so secret, even Sara doesn’t know the reason behind her mandated participation. Soon, though, the training missions become real, and Sara must overcome her fears before they plunge her into danger. When Sara’s life is on the line, can she find her true self again and follow the orders of her heart before it is too late?

And of course, a novel about the pilot Beryl Markham is a must read for me after I spotted it on NG. Circling the Sun by Paula McLain. 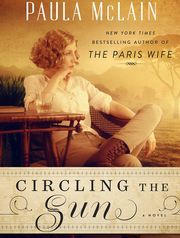 Paula McLain, author of the phenomenal New York Times bestseller The Paris Wife, takes readers into the glamorous and decadent circle of British expats living in Kenya in the 1920s. Circling the Sun tells the story of the beautiful young horse trainer, adventurer, and aviator Beryl Markham, from her childhood in British East Africa to her relationship with hunter Denys Finch Hatton and rivalry with Out of Africa author Karen Blixen—a notorious love triangle that changed the course of Beryl’s life.

Labels: What's On My Reading Radar