Today I have author Rachel Tsoumbakos hanging out with us. She recently had a new release titled Unremembered Things. Let's get to know the author behind the story a little bit better.

Welcome. You’re here to promote Unremembered Things (Book #1 in the Wood Nymph Chronicles), a paranormal romance. Tell me, please, what was the inspiration behind this story (or series)? How did it come to you?

This novel was actually several years in the making. In fact, it was the very first novel I ever wrote to completion. It has, over the years, had several complete rewrites and the story now is very similar to the original concept I had all those years ago when I was just dreaming about writing and came across a glade of redwoods unexpectedly when mushrooming.

Indiana has no recollection of anything prior to twelve months earlier. She also has to deal with the fact a vampire has moved – uninvited - into her cellar and her part time boyfriend is not what he seems. Through these challenges, Indiana never gives up; against all odds she is determined to find out the truth.

Besides being about the same height and sharing a shoe fetish, we are very dissimilar. Although, I guess we both share the same pigheaded determination to see things through to the very end – no matter how painful that might be.

Considering I usually write novels that sway more towards the horror genre, reigning back on my need to put terror and violence into this novel was hard. This story had hung around waiting patiently to be written, so I had to constantly tackle this hurdle in order to achieve what I had originally set out to do.

Research is one of the things I love most about writing. I have had to do extensive research on my previous novels, and Unremembered Things was no exception. Nothing surprising came up in the writing of Book #1 since I had researched nymph myths and legends and had mapped it out according to the fables I was following. However, in my current rewrite of Book #2, Misbegotten Things, I had a character previously named in haste. When researching into her name, I couldn’t quite make her story gel together with everything else going on in the storyline. After much study, I came across a lesser known Greek fable that fit in just nicely with this troublesome character. So nicely, in fact, it has bought the whole trilogy together in a way I hadn’t considered up until that point.

Your book takes place in Australia. If I were a tourist, what would you recommend I see in this town/country?

Unremembered Things occurs in the fictional town of Greendell, however it is based loosely on a town called Warburton. Warburton was the birthplace of Sanitarium Food Company and was founded originally thanks to the gold rush. The town is visually beautiful and is host to a large man made redwood forest. There is also a fantastic Nordic festival held every second winter and watching the town transform into a Viking village is just fantastic!

Currently my favourite TV show is Vikings (on the History Channel), so it would be pretty cool to travel back to that era and learn how to be a shield maiden! Honestly though, I find it hard to pinpoint any one time or place. It would also be amazing to travel back to ancient Greece or to Australia when it wasn’t a white colony.

To continue writing books. That’s it. That’s what I love to do the most.

My friends refer to me as the crazy cat lady, so, yeah, I’m a cat person. LOL. I currently have three fur babies as well as seven chickens. When I first met my husband, he had to win over my cat before I’d go out with him. Before that he didn’t like cats at all, so it was a VERY hard sell. 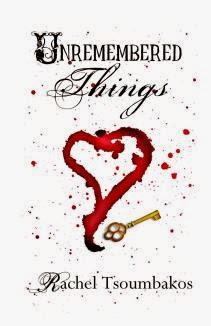 One woman, two worlds and nothing but UNREMEMBERED THINGS separating them.

Indiana Shamira has a dark secret that could shatter her version of reality and get her killed in the process. Now if only she could remember what it is…

When Indiana wakes with no memory of her past life and a vampire called Sam hanging from the rafters in her cellar, she knows things are about to get nasty. Not only does Sam know all about her previous life, but he seems intent on seducing her as well. Of course her boyfriend, Kurt, has different ideas – like making her open the portal to hell!
And then there is the nagging suspicion that Indiana is not entirely human, now she can see ghostly images from the Otherworld. Or could it be from the life she can no longer remember? They include the flickering effigy of Kurt and a redwood forest that conjures up deeply repressed magic.

Not only will Indiana have to risk everything to keep the door to another dimension closed, she will have to decide whether she is ready to lose her heart to someone who has more secrets than herself.

Set in the lush Australian bush, UNREMEMBERED THINGS is a fusion of fantasy, paranormal and forbidden romance.