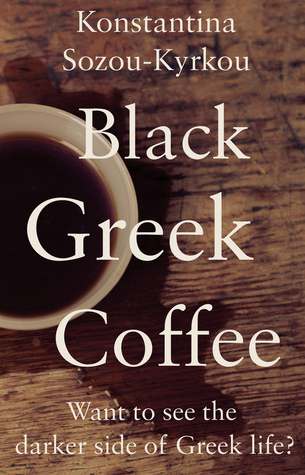 Tara: Welcome. You're here to promote Black Greek Coffee. Before you tell us a bit about it, I'd like to share a blurb with readers...

Want to see the darker side of Greek life?

Black Greek Coffee is a collection of twenty-three short stories, most of them set in rural 20th century Greece. Laced with harrowing truths, these stories deal with the darker side of life in Greece – the domestic violence, male domination, superstition and ignorance, the strong influence of religion and suffocating traditions.

Konstantina Sozou-Kyrkou paints a vivid picture of everyday life in a Greek village. Culture, landscape and traditions are a backdrop to the divisions, gaps and barriers that lie between people and their relationships. There is a prejudice and unjustified animosity that hangs in the air around them, dividing and troubling them…

This series of short stories touches on themes of self-righteousness, religion, migration, chauvinism, illness, loss, death, war, superstition, honour and gender issues. Stories of the domestic, and occasionally reaching into the supernatural, they surprise, educate and challenge the reader’s intellect.

Konstantina: What inspired me to write ‘Black Greek Coffee’ is the personal stories of people I have met or heard about, themes that have intrigued me and spurred me into turning them into coherent, exciting, fictional stories, based on real life events and existing characters.

Tara: Tell us about your heroines and their strengths.

Konstantina: My heroines are women of the 20th c. rural Greece mainly, usually suppressed in a male dominated society, women often abused physically or psychologically. They fight to assert themselves, to have their voices heard, their rights and status defended, to be rendered equal to their male partners, relatives, fellow citizens. They draw strength from personal qualities such as patience, desire to live, to love and be loved, to be respected and be given credit for their personal achievements and their contribution within the domestic area mainly.

Konstantina: Some of the stories have autobiographical elements and being myself a woman raised in a male dominated environment and suppressed by the suffocating traditions and ethics of a small, mountainous Greek village, I certainly feel I share common traits and experiences with my heroines. The notion, for example, that women shouldn’t have great expectations other than get married and raise kids was prevalent at my village, particularly in those early days of my youth. Things have been changing fortunately.

Tara: What was most difficult for you about writing this?

Konstantina: I find the process of creating a short story similar in difficulty to child bearing. It’s hard to conceive it, even harder to bear it, form it into its constituent parts, e.g. realistic dialogue, interesting plot, believable characters, a climax and a resolution and when you reach the stage of the complete, final outcome the exhilaration is unbelievable. You come to love your brain child the way a mother loves her offspring, which, nevertheless, makes it hard to spot its flaws and edit it further. That’s why it’s always useful to have a second eye, somebody else’s view on it, to judge whether it works and help you make any necessary amendments.

Tara: Tell us about the research you did.

Konstantina: I had to research on the effects of rat poisoning for the story ‘The Rats’ and learn a few things about cleaning a G43, a German rifle that features in my story ‘My Pappous and his G43’. I also had to study about the political situation during the Colonels’ coop in 1974 in particular for the story ‘Freedom and Democracy’ and learn a few things about hyenas for the story ‘The Hyenas’. The rest of the stories demanded little research on my part as they were mostly based on personal experience.

Tara: What do you want readers to glean from your book?

Konstantina: Readers will learn a lot about life in rural 20th c. Greece, about traditions and customs, about the ethics and moral values of the era. They will sympathize with women’s and children’s inferior position then, maybe identify with some of their characters and their sufferings, the unjust treatment by other stronger members of Greek society, their troubled route towards a catharsis or not.

Tara: If I were a tourist visiting Greece, what you recommend I see?

Konstantina: Black Greek Coffee takes place in several locations, the most common being a replica of the small mountainous village in Western Greece I was born in. There’s not much a tourist can see there but he/she would certainly get a feel of real, rural Greece, be acquainted with simple people with crude often manners, of shepherds mainly who also cultivate small plots of land and live on the bare necessities. Civilization hasn’t penetrated the place yet. They do have TVs and fridges but one won’t find many of the city’s amenities in a country house. The village is amphitheatric with a view of the Amvrakikos gulf and the colours of the area change with every season, the place never looking the same.

Tara: If you could time travel, where would you go, what time, and why?

Konstantina: If I could time travel I would certainly go to ancient Greece because the arts bloomed back then. People created magnificent works of art, impressive murals and sculpture, majestic temples and of course superb plays. One cannot ignore the skillful tragedies of Aeschylus, Sophocles and Euripides as well as the hilarious but didactic comedies of Aristophanes. I would like to be working by their side, learn the skills of good writing and staging such superior plays.

Tara: What's your main goal life, something you really want to do before you pass on?

Konstantina: Being a mother of two, my main and most important goal in life is to raise healthy, honest, useful members of society. Another goal, of course, would be to write interesting books, pass on some important messages to people all over the world.
Tara: I always ask this...tell me about your pets if you have any.

Konstantina:I love pets but unfortunately I live in a flat and we are not allowed to keep any, apart from goldfish. But, I guess my kids make up for not having any pets, equaling two wild lions in their angry teenage years.

Tara: Actually, goldish are pretty entertaining. I had one named Ed for a long time. I remember my dad letting the house get too cold and that poor fish actually partially froze and lived a year slightly bent. LOL

Thanks for joining us today and good luck with Black Greek Coffee. 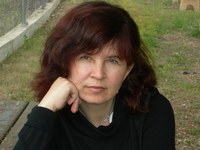 Konstantina Sozou-Kyrkou was born in a small mountainous village in Western Greece. She travelled to Athens to study in 1985 and has been living there since then with her husband and two children. She holds a BA(Hons) in Literature and an MA in Creative Writing from Lancaster University. One of her stories has appeared in the anthology Even Birds are Chained to the Sky and many more have been published online in literary magazines.