The Witch of Stalingrad by Justine Saracen 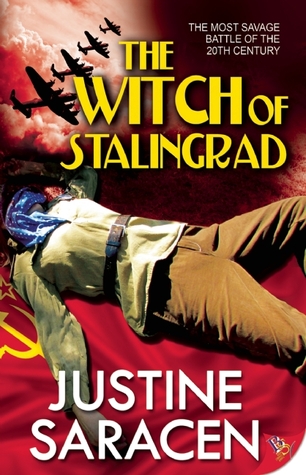 I chose this novel to read because of the Night Witches. People who follow this blog will already know who they were--Russian women pilots during WWII who flew at night, relying solely on distance, flight time, and compasses to drop bombs on the invading Germans. They were some of the most remarkable women in aviation history. This novel, however, not only shows us their bravery and determination, but also that of other women. This book is full of amazing, admirable women and I was pleased with each one, from the war correspondent who must fly a plane in battle--something she doesn't expect, to the medics who carry the wounded under fire, to the POWS in camp who huddle around their tied-up comrade to prevent her from freezing to death, this story honors them all.

And while I've read many Russian-themed WWII novels, I still walked away from this book having picked up a few new tidbits about life during the war there, like the fact they painted the Kremlin to look like a row of houses and Lenin's tomb looked like a village cottage.

Honored also in this tale and whom I was pleased to learn about is Marina Raskova, famous navigator who founded the three female air regiments we meet in this book: the Night Witches, the fighters, the dive bombers.

The story is told following two women: an American war correspondent/photographer with a Russian family history and a Night Witch who is actually so much more: a fighter pilot, a POW, a soldier. There is a wonderful romance between them, a very sweet, tasteful romance, none of that insta-love. Their love seems to grow from mutual respect and admiration, as well as physical attraction, and they make the most of the time they have together.

Strange, too, the power of an embrace, when they had only that. In the frigid air and confines of the plane, with gloved hands and heavily padded bodies, no other touch was possible. But for a few moments, the kiss was a pledge, a surrender, the center of the world, the star around which both their lives orbited.

There's food for thought, about politics, love, how we think and how our thoughts change due to the things we experience.

If I have a single complaint, it's that the physical relationship between the women seemed a bit "off". I couldn't help but notice that Alex was always the giver of pleasure and Lilya the receiver and I pondered if this was because of age or something else. But then some people receive pleasure by giving it. Something else the story made me think about.

I give this book five bikes for many reasons. It's informative, thought-evoking, well told and written, entertaining, and honors the bravery of many women. I loved it. And the ending--not ridiculous or far-fetched as some romances tend to be. It was just right.