When I reviewed Seasons of the Fool by Lynne Cantwell on Amazon and Goodreads, she asked me if I wanted an autographed print copy.  Since my space for print format books is extremely limited, I declined.  Instead I accepted a free digital copy of The Pipe Woman Chronicles Omnibus for review.  After finishing it, I realized that I had some observations to make about the books in this series that were worth a blog entry. 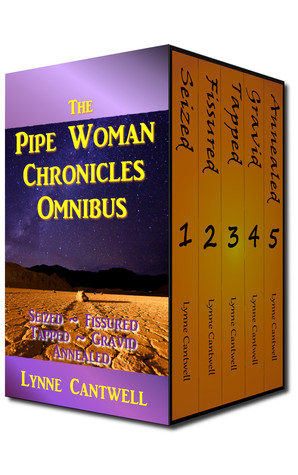 The central character of this series is lawyer Naomi Witherspoon whose practice focuses on mediation.  Naomi is a very likeable lawyer.  She loves to help people and wants all parties in a case to benefit.  Mediation is more compatible with Naomi's ethos than litigation where there are always winners and losers.

As the series opens with Seized, Naomi is a mediator for a corporate law firm in Denver.  Her life changes drastically after she attends a sweat lodge run by Ute medicine man Looks Far Guzman.  Looks Far is a remarkably eccentric character who I found delightful, and he has an enduring connection with Naomi.

Unfortunately, there was an element in the sweat lodge ceremony  which was portrayed inaccurately.  I did suspect that Cantwell might have thought that her readers would be uncomfortable with a more authentic description.  Yet later in Annealed Book #5, she didn't flinch from portraying a traditional Lakota Sun Dance which would probably make New Age readers uneasy.  So I'm not  entirely certain why she sanitized a practice of the Native American Church in Seized.

My favorite book in this series was Gravid which is Book #4.  Cantwell is at her best when she is dealing with family, friendships and the spiritual commitments of mortals.  I also liked the way Cantwell deals with both inner conflicts and interpersonal conflicts.  She understands human beings far better than Gods.   The character dynamics in Gravid were wonderful.    I loved the introduction of the journalist, Antonia, who is associated with the Greco-Roman pantheon.  Antonia is a strong woman who knows what she wants and how to get it.  This is also the only book in this series where I thought that all the spiritual/mythical content was well-handled.

After the text of all the novels in The Pipe Woman Chronicles Omnibus concludes, Cantwell reveals that there will be a new trilogy that is a continuation of this one called Land,Sea,Sky and provides an excerpt of the first one. It is my hope that she will continue to deal with the problems of  complex human characters, their relationships, their spirituality and their paranormal gifts.  If she does bring the Gods and mythology into her work, I hope that she consults multiple sources about them.  Having a more complete picture will improve her portrayals of divine beings and mythological figures.