Innocents of Oppression: Deaf Students in the UK Need A Better Education @nicksturley


I had some background in deaf issues before I read Innocents of Oppression by Nick Sturley.  My most recent related read was Inside Deaf Culture which I reviewed last year on Shomeret: The Masked Reviewer here.  What interested me about Sturley’s novel is that I’ve never read anything about the deaf in the UK.   Apparently the predominance of exclusive oralism in deaf education has continued in the UK.   This doesn’t just mean that lip reading and speaking are encouraged.  It means that signing is prohibited in the classroom.  I wanted to understand why this situation continues unchanged. 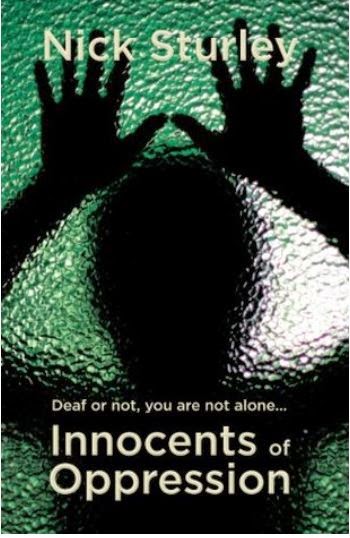 Innocents of Oppression dramatizes the impact of exclusive oralism on a group of UK deaf students at a boarding school for deaf boys.  Those that were not totally deaf tended be more successful with the oral method.  All the students were required to wear hearing aids even if they were completely deaf.  Instructors had microphones and thought that they could somehow reach students with no residual hearing by increasing their volume.  Teachers who rely solely on oral communication could shout into their microphones all day and still wouldn’t be heard by the students who had no hearing.    This is common sense.  I can’t imagine what the teachers, or the school administration were thinking.  It’s as if they didn’t know that it’s possible for someone to be completely unable to hear.  It’s like assuming that the blind are just near sighted, and requiring them to wear prescription glasses.  If they were that uninformed, they obviously shouldn’t have been allowed to teach deaf children.

Oralism wasn’t the only barrier to a good education in the lives of these students.  Bullying is a major theme in this novel.   This is why I don’t agree with Sturley’s title.  Students who engage in bullying or who react to bullying with equally violent behavior can’t be considered “innocents”.  While it was certainly true that their backgrounds often motivated their conduct, they were still guilty of harming their fellow students.  Breaking the cycle of abuse isn’t easy, but victimizers shouldn’t be given a free pass because they were once victims.

Although I was moved by the resolution of the book, there was a long info dump that preceded it dealing with what had happened in the lives of the characters in the thirty years since they’d been together in boarding school.  While it’s very likely that in real life a conversation between two old friends from boarding school would consist of catching up on everyone they knew, fiction should be more entertaining.  I would have preferred selected flashbacks.

I believe that an earlier info dump on deaf history shouldn’t have been included in the novel in any form.  The narrative purpose was bringing the protagonist up to speed, but the probable purpose of the author was educating readers.   He should have included a bibliography with recommended resources on deaf history, or placed that entire info dump on a web page and given readers the URL.

Nevertheless, I was interested to learn about the first deaf Member of Parliament, Francis Humberston MacKenzie (1754-1815).  The mention of Auslan led me to discover that Australian Aborigine peoples have ancient traditional sign languages that were developed for situations when speech was taboo.  I already knew about Native American sign languages that were used for communication between individuals who didn’t share a spoken language.   I consider all forms of communication intriguing.

I do wish that Sturley hadn’t mentioned recreational swimming with dolphins.  The capture of dolphins for this purpose traumatizes them.  See this article from World Animal Protection and this article from Right Tourism. My concern for the rights of intelligent beings extends to non-human species.

There was some good characterization and character interaction in this book and I learned a great deal about deaf education in the UK.  British families who can’t afford to send their deaf children to the U.S. for a better education need more advocacy.  I’m sure that this is Sturley’s central purpose and I applaud him for that.

Website with Video (subtitled) http://innocentsofoppression.com/
Article about the author in Limping Chicken: http://limpingchicken.com/2013/09/12/nick-sturley-how-having-usher-syndrome-changed-my-life-part-1-my-first-diagnosis/