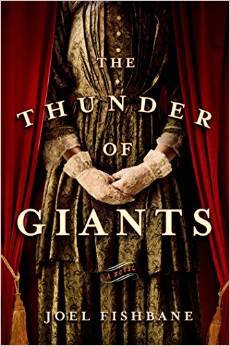 Sometimes I read a book that I just love--and not a moment too soon, especially after a month of duds (You readers know what I speak of, when every book you pick up stinks to high heaven and you begin to despair that you'll ever read another good book...and maybe the problem is you!) and I'm left speechless and don't really know what to say but, "I loved it!!! Read it! You don't want to miss this one!"

First of all, this novel not only transported to me two different times and places in history, but it also made me laugh. From the mention of nervous farts to the witty offhand remarks between characters to the scenes themselves either in the tailor's shop involving a broken foot or the set of a Hollywood movie, the book fairly burst with surprise laughs.

Second, we learn about not one remarkable woman giant, but two, the first--Anna Swan--having been a real woman. I'm sure some artistic license was taken here, but we get the basics of the real woman, her size, her working for Barnum, her marriage and tours. Anna Swan is def my favorite of the two heroines. She's brave and amazing. She saves orphans, helps soldiers during the Civil War, all the while battling with her size. Her parts bring up issues of exploitation and even marriage. She's told she should marry someone like her. But what's so different about her really? She's may be large, may be called a giant lady, but really, she's just a lady. And we follow this lady from childhood in Canada (Pilgrims and New Yorkers will be shot! LOL) to "performing" in a museum to war to marriage, thru loss.

The second story is just after WWI, and another large lady deals with many of the same issues, combined with guilt over the death of her husband and feelings that things out of her control were caused by her. As another character later points out, she may be the reason for some decisions others made, but she didn't make their decisions for them. But she must realize that for herself.

So we have humor, history told in an entertaining way, two remarkable heroines, real-life struggles, food-for-thought, and all this told in a very engaging narrative.

If I were to complain about anything at all, it'd be that sometimes I became confused between the two heroines. At times the transition between 1930s and the late 1800s wasn't completely smooth, but I still loved this tale. In a time when authors are rewriting the same story over and over and over, to have finally picked up a novel completely and totally unique is a wonderful experience.

Thank you to Netgalley for a digital copy of this.