Letters to the Lost by Iona Grey 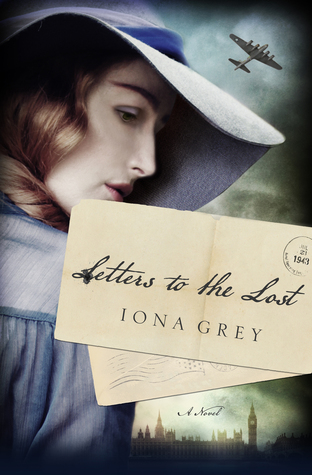 When I first came across this blurb and title, I was somewhat afraid to read it. I was afraid it'd mostly be written through the hero and heroine's letters, with little to no dialogue.

I'm pleased to say that wasn't the case. There's plenty of dialogue, character interaction, and also a modern-day story following another couple who, each in their own ways, manage to tell us what happened so long ago to split Stella and Dan.

There are letters, from Dan to Stella, as the modern heroine finds them, but they don't take pages and pages of the book. Instead, the novel goes back and forth between 2011 and 1943. It's not jarring, but a smooth transition.

The writing is excellent. I was surprised to look her up on Goodreads and find no other titles to her name. I got the impression while reading that she is a very skilled, professional author.

I confess to growing bored at times though. If I can read just a few sentences on each page and not miss a beat for a few pages, I'd say it's a bit overwordy. It began to feel like a 600-some page book. However, this could be because I've read so many WWII stories by now that nothing was new to me, at all. Not Dan's aviation tales, not the rationing issues... Absolutely nothing was new or remarkable with the WWII story.

But what I really disliked in the end were the heroines. The modern one, I just never got invested in that story, not like I did the historical one. I didn't grow to care for that couple like I did Dan and Stella. DS came alive for me. And having became intrigued/wrapped up in Stella, she and her choices disappointed me most of all. I'd hoped she'd have developed a bit of backbone in the course of the tale. I wanted to slap what was left of her wits right out of her when I realized she'd stayed in an abusive relationship for all those years, denying herself happiness, because she "didn't deserve it".

I like my heroines with a bit more spine.