Lots of stuff going on in this TV show based on the life of women during WWII, more specifically bomb girls, women who worked in a bomb factory. Season one consisted of 6 episodes, of which I recorded on REELZ and watched almost back to back.

Glady's. Can't say I was overly fond of the star: a rich girl "slumming" it, not in the beginning away. She thinks aiding the war effort consists of lifting her skirts for a total stranger of a solider in a dark alley. The first episode I wasn't impressed at all. She gradually begins to improve, but I sensed there may be trouble for her actions later down the road. By the end of the season, however, she was one of my favorite characters.


The rest of the cast:

Betty. She's the toughest bomb worker of them all and a lesbian in a world not ready for them. I felt her anger when she was misepresented in a movie.

Kate. A former preacher's daughter on the run with an obsession with singing. A HUGE disappointment in the end. HUGE.

Lorna. The "crew chief" who is married to a man crippled from the Great War and experiencing some frustrations because it. She loathes the Italian worker, Marco, with a passion, and for great reason. (I thought he was a dick, but my stepmum thinks he is hot. He's also one of those characters you like better in the end than the beginning. There are a few layers to him.)

Vera: Is distracted by the flirtatious Marco and gets her scalp torn off her head. As morbid as this sounds, her story is so far my favorite. I can't wait to see how she overcomes this  handicap of hers.

There's bad news received, deaths, fake letters, a thief, someone gets the clap, there's turning on one's friends, potential rapists... and lots of sexual harassment on the job. I love how the show shows how uncomfortable men's harassment can make women and the distraction leads to accidents. And of course, anytime something goes wrong, like a bad bomb, they blame the women. 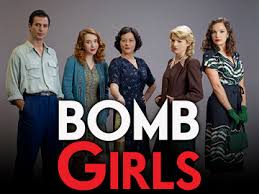 As I said, not overly fond of the rich girl, but the rest of the women really sucked me into their lives and I found the factory bits though frustrating to watch at times as the men anger me, fascinating. I found myself watching them make the bombs instead of paying attention to their conversations at times.

If you see this coming up on Reelz again soon, tape it. You won't be disappointed. The shows in order:

Website complete with episodes and tour of the bomb factor.