Strong is Sexy Woman of the Past: Blanche Stuart Scott

This woman came to my attention via my dear friend, Amanda Watson. Knowing my passion for aviatrixes, she found an envelope postmarked 1980 at a flea market. On it is a picture of this woman, the wooden airplane she flew in, and a stamp with her likeness. 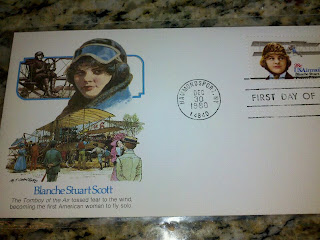 She was the Tomboy of the Air and the *first American woman to fly solo.*

You can read the photo for yourself, but if not, it says she had her first flying lesson in 1910. She was part of a group of barnstormers and did air acrobatics at air shows and fairs. She hoped first and foremost that she could help open new aviation opportunities for women. She later became a filmwriter, radio commentator, and station manager, as well as a special consultant to the USAF. 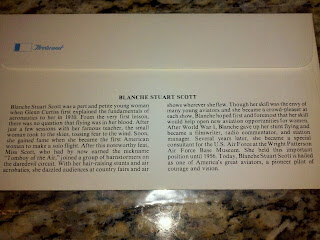 From digging deeper on the Internet, I also discovered:

-She was the first (or second. I'm finding conflicting reports) woman to drive an automobile across the United States.
-She was instructed by Glenn Curtiss himself, the only woman he taught.
-She was the first woman to fly long distance and the first woman to fly in a jet, with Charles Yeager, the man himself.
-*Her first solo flight is not official as it was a 40-foot  hop in the air, but her reputation reached amazing heights.*
-She did "death dives" from 4,000 feet.
-She was a test pilot too! For Glenn L. Martin.
-She got behind the wheel of an automobile at 13!

Much more data can be found on this page: http://www.ctie.monash.edu.au/hargrave/scott.html
Of the pages I browsed, I found this one to be the neatest and easiest to follow. Photo below is also on their site.


What I like about her: She set out to do something and she did it. This wasn't an easy feat back then. Heck, it still isn't.

'Til next Saturday, ladies, remember: think it, achieve it, do it. Don't let naysayers stand in your way and don't forget STRONG IS SEXY.
Posted by Tara at 12:00 AM