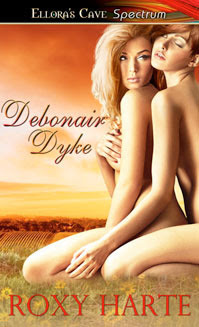 This was a very eye-opening book for someone who has never read about transgender issues before. It introduced me to a new world as far as the difficulties a person of transgender gender faces on a daily basis: how people perceive them, judge them, treat them, the rude questions. I mean, on some level, I know life isn't peachy for them, but just how far it is taken wasn't clear to me.

Danni left small town Kansas to get away from the hate and rules that were holding her back from being her. She lives the high-life in NYC, taking a new woman or women to bed every night by night and doing the college/speech/educating thing by day. Her goal in life seems to be 1. getting laid and 2. educating the rest of the world about transgender studies, etc.
But then she's called back to Kansas for her ill father, and it all comes crashing down, or does it? Maybe she was called there for a reason.
Enter gossip, hate crimes, discrimination, love, and self doubt. Run the garage? Date Jessica? Make a stand? Stay in po-dunk, hateful Kansas where she doesn't feel she can be herself or go back to NYC where she can? But can she leave some things behind? After all, one has to go back and face the trouble to heal from it, right?
"I've studied, I've theorized, I've lectured, I've educated. I'm seeing it now. Just now. That was all practice runs. This is the real deal. This is the part of the world that I need to be talking to, educating, changing."
She stays and she makes a difference, but like anything that really makes an impact, it's not easy. A shocking secret is revealed in the end, a misunderstanding is corrected, and though it has a happy ending, it's clear the path isn't paved in gold for Danni or Jessica.
The story really resonated with me for many reasons and it was incredibly well-written. I do have one quibble though. Two. 1. I didn't really get the strap on. I've never read a book in which a woman wore a strap on and will be the first to admit I'm ignorant and a poor judge, but what really confused me was Jessica. She couldn't be with Danni at first because of the strap on ("I don't like boys.") so her suddenly begging for it the second time around was strange and unexplained. I felt there was something psychological there I was missing. My second quibble: I felt all the women constantly throwing themselves at Danni was odd and slightly preposterous. It was instant. Immediate. I mean, just saunter into the garage, tear your pants off, and beg her to you know...immediate. *arches brow*
Four bikes.