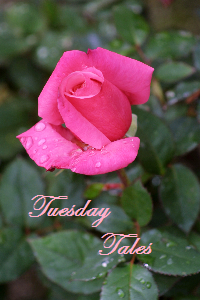 So, I'm part of a new group called Tuesday Tales, and every Tuesday, we post a flash fiction piece or a scene in our WIP using a specific word. There's going to be picture prompts too, but one thing at a time. LOL This Tuesday, the word prompt was SEXY. And as I'm currently writing a young adult novel, it just didn't fit in my WIP, but another idea took me entirely. Here it is. I hope it touches you.

Will he still love me? was her first thought when she looked in the mirror, naked, for the first time since her surgery.

She’d been avoiding it long enough—two weeks. At some point, she had to face herself and then the world. Having gone to the doctor’s office that morning to have the stitches removed didn’t count as facing the world.

When she went back to work, when she began doing the groceries again, when she went to her book club meeting, she’d be facing the world.

What would they say?

She’d been able to gently wash the area and had winced as it was a bit swollen and tender, but Dr. Mendelson had told her she’d healed nicely. She’d had none of the complications that often arouse from this type of surgery.

“You are very lucky,” he’d said. “No fluid buildup, no tightness between arm and shoulder, no blood clot or infection. Very lucky!” He’d placed his hand gently on her shoulder and patted her, as though she were a dog.

He’d meant well, but he didn’t understand. She wasn’t worried about blood clots or fluid—though she should be.

Will he still love me?

She gulped around the hard knot in her throat and watched as one-by-one, water drops trailed down the bathroom mirror and bit-by-bit, the fog hiding her from view dissolved into water. At first she saw only an eyeball—hers—and then her dark brow above it, soon her cheek and neckline as well.

Almost too soon, her entire upper body was visible to her own gaze. She shivered from the water drying on her own skin, from the water making lazy and cold trails down her flesh, dripping from the tips of her hair, over her shoulders, down her flat chest.

Soon, tears mingled with the remnants of her shower, running down her cheeks.
With a shaky hand, she touched herself, touched the angry red slashes where her breasts used to be, where the stitches had been removed.

She raised her chin and looked in the mirror, fighting the quivering of her chin.
If she placed her hair just so…

Quickly, she grabbed her wet tresses, dividing her hair in the middle, and placed the locks over each side of her sternum.

It was long enough to cover her empty cavities. It trailed down her chest, almost reached her belly button. She didn’t look half bad now.

She allowed herself a tremulous smile, blinked the tears from her eyes.

“Darling, how do you feel today? Are the meds still making you tired?” His voice surprised her. She hadn’t been aware he’d entered the bathroom, but there he stood, right behind her. She gasped and saw her eyes widen in the bathroom mirror.

“I… I feel okay,” she answered hesitantly and glanced quickly around for her towel—something, anything.

And then he took his hands, cupped her long dark hair, and twined his fingers in her wet locks. He pulled her hair behind her back—undoing her oh-so-careful placement!—and placed a kiss on the nape of her neck.

“I love you,” he murmured. “You are so sexy.” He placed his chin on her bare shoulder, her red slashes clearly visible to them both—and winked at her in the mirror.
Her lips parted with surprise, but before she could protest, he was gone, having imparted one last kiss where his chin had just rested.

She touched the nape of her neck and then trailed her fingers to her shoulder. Her flesh tingled where his lips had touched.

Her lips curled up in a smile then.

The other Tuesday Tales are HERE. Please be sure to see what the other incredibly talented writers in my group came up with. Thank you for letting me share this story with you.
Posted by Tara at 6:26 PM