In colonial America the concept of an ethical magical practitioner didn’t exist.  There was no vocabulary that would allow people to discuss such a person, and therefore no way to even imagine that someone like the protagonist of Goddess Born could be real.  Selah Kilbrid was a healer and midwife in a predominately Quaker town in Pennsylvania, but she was also secretly a descendant of the Goddess Brigid who gave her super-human powers to heal magically.  In modern parlance, I would characterize Selah as a priestess of Brigid.  In 1730 the full truth about Selah could never be known because she would be condemned as a witch.  Selah is forced to take some highly unusual steps to escape this accusation.  Historically, colonial witch hysteria targeted people who didn’t practice magic at all with the possible exception of the slave Tituba, but Goddess Born by Kari Edgren is a historical paranormal romance.  I received a free copy of this book from the publisher in return for an honest review. 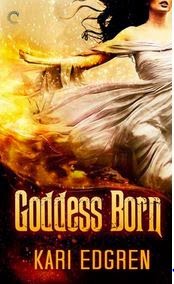 We generally associate Puritans with colonial witch hysteria, not Quakers.  Since Quakers are supposed to be non-violent and officially did not believe in witchcraft, it’s hard to imagine that the lodging of a formal accusation of witchcraft would have arisen in Pennsylvania during that time period.  Yet it actually did happen once.  See Pennsylvania's Only Witch Trial on the website Quakers in the World to learn more.

This has been a year in which I’ve discovered historical Quakers engaging in activities that are against Quaker principles.  In Slavery and the Meetinghouse by Ryan P. Jordan, which I reviewed on my blog at http://shomeretmasked.blogspot.com/2014/08/slavery-and-meetinghouse-complex.html, I read about Quaker abolitionists who carried guns and even some Quakers who fought in the Civil War.  These are Quakers that I had never envisaged.  The modern Quakers that I’ve encountered have been strong proponents of non-violence.  Now Kari Edgren has asked me to contemplate 18th century Quakers persecuting a young woman who had benefited many members of her community.  Do I think it’s believable?  Unfortunately, I do.  There was another novel that I read some time ago which causes me to find Goddess Born credible. It was Impassioned Clay by Stevie Davies (1999) which deals with Quakers persecuting women as heretics in 17th century England.  Stevie Davies is a historian who also wrote a non-fiction book called Unbridled Spirits which, as one of the reviews on Goodreads points out, contains some Quaker women.  For more information about Stevie Davies, see her website at http://www.steviedavies.com/.

This book does contain some predictable elements that are due to its being a romance.  Romance readers will want to know whether it adheres to the rule that every romance must end with HEA.  I have to tell them that it isn’t quite HEA.  Goddess Born ends with the chance of HEA which could be setting up for a sequel.  A sequel would justify a delayed HEA.  I found the ending a satisfying one.  It resolves the Pennsylvania story line.   I also enjoyed both the heroine and the hero.  The heroine was unusual and the hero turned out to be both courageous and principled.


The power to heal is her divine gift, the fear of discovery, her mortal curse.
Selah Kilbrid is caught between two worlds. A direct descendant of the Celtic goddess Brigid, she is bound by Tuatha Dé law to help those in need. Yet as a human, she must keep her unique abilities hidden or risk being charged for a witch. In 1730 Pennsylvania, the Quaker community of Hopewell has become a haven for religious freedom—and fanaticism—and there are those who would see her hanged if the truth were revealed.
For eighteen years, Selah safely navigates the narrow gap between duty and self-preservation, until the day a prominent minister uncovers her secret. Obsessed with her power, Nathan Crowley disregards her betrothal to a distant cousin from Ireland and demands marriage in exchange for his silence. Selah stalls for time, but when news reaches the Colonies of her cousin’s death, time has run out.
Rather than submit to Nathan, Selah coerces a stranger to pose as her husband. It’s a good plan—her only plan—even though Henry Alan harbors his own dark secrets. But when she returns to Hopewell a married woman, the real fight has just begun. As unseen forces move against her, Selah doesn’t know which poses the greater danger—a malignant shadow closing in from outside or the internal fire that threatens to consume her heart.
Book Two in the Goddess Born series will be published in November 2014 and Book Three in June 2015.

Kari Edgren did not dream of becoming a writer. Instead, she dreamed of everything else and was often made to stay inside during kindergarten recess to practice her letters. Despite doting parents and a decent school system, Ms. Edgren managed to make it through elementary school having completed only one book cover to cover – The Box Car Children, which she read approximately forty-seven times. Things improved during high school, but not until she read Gabrielle Garcia Marquez’s One Hundred Years of Solitude in college, did she truly understand the power of a book.
Ms. Edgren aspires to be a Vulcan, a world-acclaimed opera singer, and two inches taller. She resides in the Pacific NW where she spends a great deal of time torturing her husband and children with strange food and random historical facts. Ms. Edgren hasn’t stopped dreaming, but has finally mastered her letters enough to put the stories on paper.
For more information please visit Kari Edgren’s website. You can also find her on Facebook, Twitter, andGoodreads.
Sign Up for Kari Edgren’s Newsletter.