Sometimes What We Want Isn't What Makes Us Happy...Go Away Home by Carol Bodensteiner 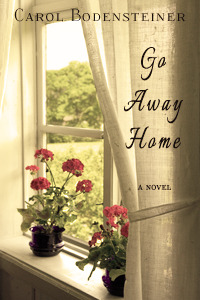 I devoured this novel in a day. I just liked it that much and was so interested in what happened. The story follows Liddie, a young girl on a farm who wants so much more, to go the big city and become a seamstress/dress maker. She wants to see the world.

There's no huge mystery; it's not all about romance either. Really, it's just everyday life in Iowa, from the POV of a farm girl with dreams. But is what she thinks she wants what's going to make her happy?

As she grew up in the story, it became so obvious to me, the changes that were occurring not only in the world around her, but inside her. We are never the same person we were ten years ago.

There are beaus. Proposals. Career changes. Deaths in the family. Choices to make. Snotty people about town. Kind-hearted folks who lend a hand when needed. Family drama and love. And as she lives her life, we hear about what's going on in the world too: Wilson not granting women the vote, the stirrings of WWI, the women not wanting to send their sons, the draft, the tension over Germans, the orphan trains, the Spanish flue.

Also, the trials of juggling one's desires and one's spouse's desires too and how sometimes we  may have to set aside our dreams for a while but not abandon them completely. There's a time for everything. That was somewhat a moral, I guess. At least that's what the story made me think about and I like a book that makes me think. It also touches on the give and take in a marriage.

And so much fascinating stuff about photography during this period.

I have nothing bad to say about this story. I really enjoyed the writing, the characters, the lessons within its pages, and the peeks at interesting things that occurred in American Midwest history. I'll be watching for another novel from this author.

I borrowed this on Amazon Prime.