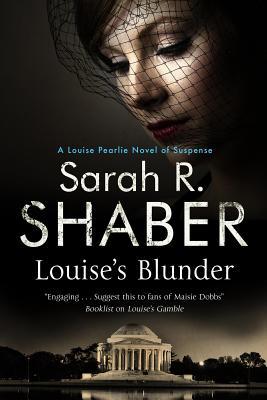 This is book four in the Louise Pearlie series. (I only read book three before reading this one and I haven't been one bit lost.) Louise is a woman who works for the OSS during WWII, in D.C. What's the OSS? I can't remember what exactly it stands for, but think of it as an early version of the NSA. Louise's official task: filing clerk, but what she really does is decipher and translate and record mysterious data and notes and whatnot from spies overseas and searches for spies here at home.

What I really enjoy about this series, besides a heroine who knows her own mind, sticks up for others, and is intensely independent, is the historical setting. Through her we see the housing situation/rules in D.C. during that time, learn of all the political tension and how one must watch what they say, and meet a variety of characters. In this one we meet a returning war vet missing his arm and though it's a small side story, find out why he's so angry and tired of being asked about his Purple Heart.

Side stories such as his really happened and make for thought-evoking reading.

Ms. Shaber even managed to put bits of the racial tension/situation in the States in this installment. I applaud the author for keeping Louise at the homefront. Her series shows that there was a LOT going on here too during the war.

And as usual, Louise's file clerk duties get set to the side when a higher up asks her for some discreet help. A little blunder lands her on the case of a murdered man. Was he murdered? Or was it an accident? But if he wasn't murdered, where is his wallet? And why was he being investigated by the OSS?

Page by page, secrets are revealed, but never enough to make me solve the case. I love it when I have no clue whodunnit or am proved wrong. I like a good surprise. The case/story is topped off with a very intense storm, more bloodshed, and a fearful night during which I wasn't sure the Louise was going to get out of the mess this time...

Historical details: Well done. Excitement: Lots of it. Interesting characters: Many. Will I read the next book: Yes. Romance: Not this time. Quibble: Some things were repeated unnecessarily here and there.

I received this via Netgalley. And, oh! Be sure to read the author notes! Just a fabulous touch.