Harvard Campus During WWI: A Place of Romance, Riots, and Conflicting Emotions in The End of Innoncence 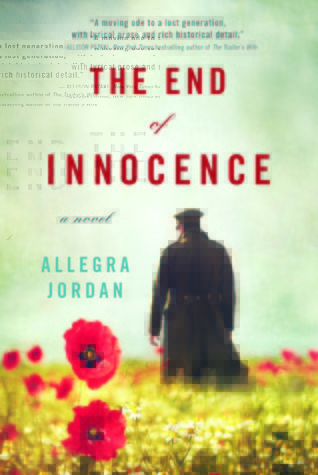 "He knows who I am and loves me for it. And I'm better for that."

I wasn't really sure what to expect from this one. I was drawn to this title because of the young lady attending Harvard (Radcliffe, actually) during WWI. Technically she can't attend Harvard--they didn't allow women--but she is permitted--invited--to attend one class on the exclusively male campus and there, she mingles with poets, playboys, and Germans, who during this time, were not quite welcome in the States anymore.

The campus is rife with hatred and students wishing to find someone to blame for the deaths of their loved ones overseas. This results in riots and beatings and needless to say, students of German origins are not safe. I found the story education in this aspect. Though I knew Germans faced hostility during this time period, their treatment on college campuses never really crossed my mind. I can't say it surprises me though. There's more than riots and rough "play" here too. There's "white collar" hatred going on as well, such as "I'll donate money to your college, but the German professor has to go..."

And witnessing all this is Helen, a young woman fresh in college, a smart lady who edits her father's books, is embarrassed by her mother's birth control pamphlets, and is falling in love for the first time after getting her head turned by a wrong fellow or two first. Though I wouldn't call her a suffragist as she doesn't seem to have strong feelings on the the subject, she isn't a doormat either. I'd say she's still finding herself as one moment she's racing a car and the next she is unable to make a man step off the hem of her skirt. But this is a confusing age to be and her characterization made sense.

I'd also just like to take a random moment here to say this is very well written. I loved the sudden surprise bursts of sarcastic humor that appeared here and there, making me chuckle and I also enjoyed how very poetic the prose is.

All that was beautiful was going. Like a garden that withdraws into the ground before a very long winter.

But I have some quibbles:
Wils seemed confused much of the time. One min he says Arnold isn't a murderer, the next he is. One minute the kaiser is ruining his life, the next he's saying he must fight for his country and won't denounce it... He seemed confused and thus confused me. But yet, at the same time, perhaps this is how it's supposed to feel. I would be confused too! Also, when in the world did a wedding occur? How did I miss that? (I read a digital galley and it's possible a scene was missing.) And later in the story why does Helen act like her and Copeland had only met in Wil's room? He was her professor too. So many little weird things.

I thought Helen's mother's "misdeeds" were quite fascinating. I wish she'd actually been a part of the story, that we'd experienced her presence.

The poetry readings and the literature discussions were--I'm embarrassed to admit this--somewhat over my head. The last 40% really bored me. It was just too much testosterone--it began to follow Riley and Wils in the trenches of war. I'm not into that. You've read one war scene, you've read them all--fear, trench foot, etc. Though I did enjoy the cease-fire despite the fact that wasn't new to me either. It was just neater this time around because Wils went look for Riley who was fighting on the opposite side and it warmed my heart reading about these Harvard students still enjoying mutual respect for each other even though they were trying to kill each other the day before...

And the ending...the last 20% was so disjointed and out of place (though I did enjoy the discussion with Copeland). Perhaps it went too far ahead into the future.

A nice read. I'll be watching for this author's next title. I received this via Netgalley.

New comments are not allowed.