Her Brilliant Career: Ten Extraordinary Women of the Fifties by Rachel Cooke 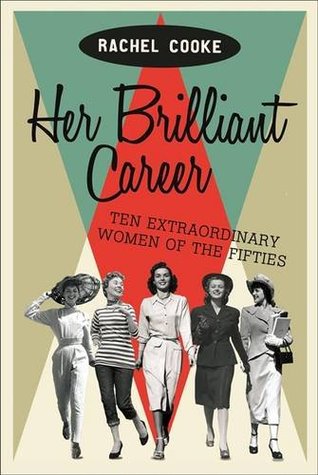 The book title is rather self-explanatory. You know what this one is about. Ten women with brilliant careers in the fifties. As usual with a biography, half of it bored me; and half of it was intriguing. No offense to anyone, but a woman who wrote a cookbook doesn't interest me much; neither does a gardener. But some of the women featured in this book really did interest me and made for good reading:

What interested me about her is that she felt great fear before racing. Racing in the fifties was not as "safe" as it is today. The book points this out with hard facts about deaths, not only of drivers but of bystanders being decapitated by flying debris and death from car fires. It was a serious and deadly business and though she was afraid, van Damm kept driving, even entering the most dangerous race in the world. And even better, she was known for finishing every one, no matter her placing. She was also a pilot. When her dad said he wanted to start a charter company and told her to "Go and learn to fly," she did just that. Though it was a failed business, again, this woman faced her fears. She even joined the Volunteer RAF Reserve.

Before rally races, she worked as a driver in the Women’s Auxiliary Air Force.
Her side business, her dad's business that she later took over, was running a club called The Windmill. The bits about the club itself really hooked me, even when they weren't related to van Damm herself. Such as the fact they could have nude girls, provided they didn't move, so that women were nude but stood frozen for 12 minutes--except during a particular bad bombing in the Blitz, when one nude girl wearing nothing but a hat broke the rule by thumbing her nose at the planes above.

Also of interest to me are the lady film directors. Muriel Box, according to this book, was a feminist and if you watch her movies and are savvy enough, you'll detect a feminist message/undertone in the films.

Matter of fact, I'm going to watch one of the movies directed by her this week--the only one I could find here in the States available to me, The Truth About Women.

Here is another example of a woman who refuses to give up. While critics were sneering about her last movie, she was hard at work on the next one. It was not a welcoming industry to women in those days--is it now either? I know Hollywood is def male-dominated...

An interesting bit in the book tells about how the film industry came to her, which is very cool because she'd always wanted to work with movies, and one day she meets the right person on a train... I also liked reading about how this woman just walked out of her family home with nothing but a bag, and made good for herself.

She later started her own feminist publishing company, Femina. This "chapter" also introduces us to Betty Box, Muriel's SIL and a movie producer. TBH, I lost interest in the women themselves as I read this and began looking up all their movies as I'm an old-movie buff. I'm sad to say I can't find some of them available for viewing. Namely, Both Sides of the Law AKA Street Corner. Someone, please, make this movie available on streaming or even TCM.

Moving on, another woman I enjoyed reading about is England's first woman judge, Rose Heilbron. Here is a strong woman who maintained her femininity while rising from lawyer to judge. After her mother's death long before, she put her own dreams on hold to help her family. Something particularly touching she did was to rent a wig and gown and appear at her deceasing mother's bedside, as she knew her mother would not live long enough to actually see her daughter succeed. Her chapter starts with the relating of an interesting case about a burned houseboat. She had one daughter and after the difficult birth, was back in court in just 6 weeks, and this after nearly dying.

I enjoyed reading about a few of these women, but must confess like many biographies (and the reason I tend to avoid them) it drops fact after fact after fact in a manner in which we can't possibly remember half of it. Also, a few of the women seemed unlikable to me, flitting around lover to lover, hurting many people as they go. Is it admirable that they saw what they wanted and took it? Yes, but it's hard to read about people you probably wouldn't stand in real life. I'm not sure I would have chosen some of the women featured myself.