The Poppy Factory by Liz Trenow: An Emotional Tale About the Effects of Shell Shock 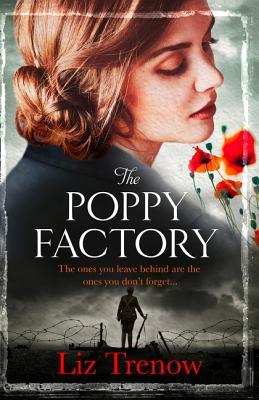 It's not only the visible injuries, but the invisible scars in their brains that they are having to cope with, even months after the war has ended.

The story goes back and forth between a modern-day heroine who has just returned from the Afghan war and is struggling in her relationships and the day-to-day life of being a paramedic. She's overtaken with rage, drowns herself in an alcoholic haze, and can't stop the nightmares and flashbacks. Could her great-great grandmother's diary, detailing the days after WWI and her husband's own struggles with PTSD be just what Jess needs to get back on track?

I think I preferred Rose's story and character more than Jess's. I am not overly fond of the diary method though. I would def have enjoyed the book more had Rose's story been a story (like Jess's) and not a diary. I still became completely immersed in it though. What I really liked the most about Rose's tale is how we see England right after WWI, the rationing, the emergence of the flapper era, the two-minute silence, the tomb of the unknown soldier, the spiritualists taking advantage of grieving women, discrimination against pregnant women in the work field, the origins and purpose of the poppy factor... Rose's tale, despite the diary telling of it, is so emotional. Rose herself is also just amazing...

I've grown up, become more self-reliant, tougher and less sentimental. I was just a girl, and now I feel much more like a woman, capable of making my own decisions, determining my own future...

...as she carries her husband and herself through bad times, gets work as a machinist, and unlike the love interest of the modern story, stands by her husband in bad times as well as good.

Meanwhile, Jess's tale is self-pity and not much else. She has a flashback, cries, drinks, worries about her boyfriend, repeat. I'm not saying what she is feeling/going through isn't important--it is. But the historical story has so much more going on than just the issue of shell shock. It not only contains everything I mentioned above, but also a side drama involving a criminal/black marketeer. The modern story is strictly Jess's trauma. And her beau...honestly...if he can't stand with you during the bad times, then he's not worth keeping around for the good. "Go straighten yourself out first..." Whatever, dude. Jess's pining for him didn't win points with me. At the first sign of trouble, he dumped her. I say move on, girl.

But Rose...what a woman and what a story. We could all learn from her. And. ladies, do take a moment to read up on Anna Guerin and Moina Michaels, the women who helped soldiers--either by honoring their memories or providing the disabled ones with minor labor, and the story behind the poppy being associated with the Great War soldiers. It's a beautiful, real-life story and you can read it here.