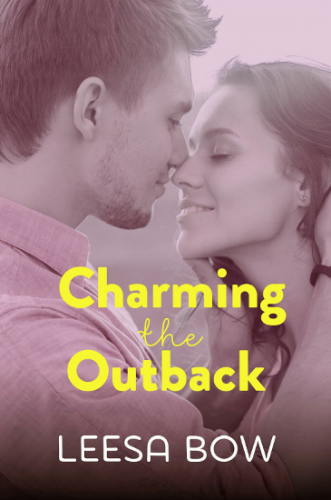 In Charming the Outback, we get to take a trip to Australia and experience the way they live and their culture. I enjoyed seeing the differences from how things are where I live in the USA. I found Maddy to be a strong woman to want to change her usual ways and embrace the more country and hard working lifestyle of working on a station.


Charming the Outback is a second chance love story...usually one of my favorite types of romance stories. I enjoy seeing two people find their way back to one another and working through their problems. Which is what Luke and Maddy did.

The beginning of this story was slow and I didn't feel the connection right away between Maddy and Luke. He was awful to her and a big jerk. She became friends with another guy, Zane. And to be honest, I felt more chemistry between them. They were more flirtatious with one another, joking, and more at ease. When Maddy was with Luke, it was just anger toward one another, which I usually like, don't get me wrong. I like a strong conflict and the hero and heroine having a hard time getting along. I think throwing Zane into the story, made me want to see Maddy with him. I hope that Zane gets a story soon. I'd like to see him find love and settle down from his playboy ways.

*Possible spoiler*
The heroine grows a lot in this story. She matures - which is one of Luke's biggest complaints about her. She shows him that she can be the woman he wants her to be. Until the very end, I never saw Luke changing for her. He was very hard on the heroine and the way she was throughout the story. Thankfully in the end, he wised up and finally saw he needed to compromise as well if things were going to work out with the woman he loved.
*End possible spoiler*

All in all, I enjoyed the story. This is a very sweet story, little to no sex in it. And when there is sex, it's not in much detail. You get the idea they are together and that's as far as it goes. I enjoyed all the secondary characters and will be interested in their stories when they come out. I've not read the first book Winning The Player, but it's not needed to enjoy this story. As they are written as stand alone stories.

The book summary:
When jaded city girl Maddy McIntyre packs up and leaves Adelaide for a new job in the country, it's not only a chance at a fresh start. Six months ago, the first guy she'd ever loved shattered her heart before moving home to Broken Hill. Deep down inside, Maddy is hoping that living in the same town will give her an opportunity to prove to Luke that she's one temptation he can't resist.

But when she arrives in Broken Hill, Luke White is not the same guy she knew in the city. And it soon seems very clear that he doesn't want her there. Although Maddy settles in quickly, excelling at work and partying with her new friends, she can't understand why Luke is remaining so distant. Particularly when all her instincts are telling her that they're meant to be together – and that he feels the same burning attraction.

As Maddy learns more about Luke's family and background, she begins to understand that his mixed messages are caused by balancing what's expected of him with what he really wants. Maddy gave Luke her heart long ago and, despite their differences, she knows she'll only ever be happy with her hot country boy. But how can she convince him that she's the risk he needs to take?