Susanna Quiner hid while she watched four of her sisters being violently torn from their home by a party of Potawatami warriors.   Is this the opening scene of a propaganda piece designed to show us how savage the original inhabitants of North America were?   Thieving Forest by Martha Conway may seem that way initially, but this story line is more complex than readers might think.   I received a free copy of this novel from the author in return for an honest review. 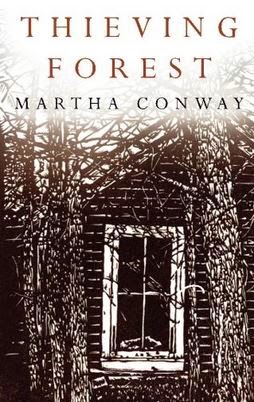 The tale takes place in  early 19th century America.  Its portrayal of the period is neither utopian nor dystopian.  Martha Conway goes for realism.  There are both horrific events and wonderful ones.
The capture of these sisters isn’t what it appears to be. Each of the Quiner sisters has her own individual destiny.  Susanna is determined to restore her family to the situation that had existed before they were captured, but neither her sisters nor their home were ever going to be the same.  This is a lesson that Susanna learns over the course of the novel.

I do have to say that while Susanna is a sympathetic viewpoint character, she isn’t the sister who interested me most.  From the beginning, I was drawn to Naomi the musician. Her story also turned out to be the one that I most wanted to follow.  I would like to find out more of what happened to Naomi after the events of this book.

I  learned more about a group of settlers about whom I had previously known very little.  The Moravian missionaries who were originally from Germany established a settlement in Pennsylvania that was called the Gemeinschaft in this book.  They and their Native American converts to Christianity seemed to live together in equality and harmony.  Yet when Susanna looked beneath the surface, the Gemeinschaft didn’t seem so perfect.  Perhaps one of the lessons of  Thieving Forest is that there are no options that are perfect for everyone.  Their community’s social structure reminded me a bit of the Shakers.   I wanted to know more, so I ran a few searches on the Moravian Church.  I learned that although they call their community a Gemeinschaft now, there is no record of their having done so in the early 19th century.

Just as Susanna's desire to re-create an ideal past was fated to be disappointed, readers who expect an ideal novel will never find one.   Even if the author had chosen to follow Naomi rather than Susanna as I would have preferred,  I probably would still have found flaws in  Thieving Forest.  Perhaps I would have become less enamored of Naomi if I had seen more of her.  She might have made some foolish decisions as Susanna occasionally did in the course of the narrative.  Yet Susanna always redeemed herself.  Although there could have been many alternate paths that  Thieving Forest might have traveled, the book we have is very readable and periodically enlightening.