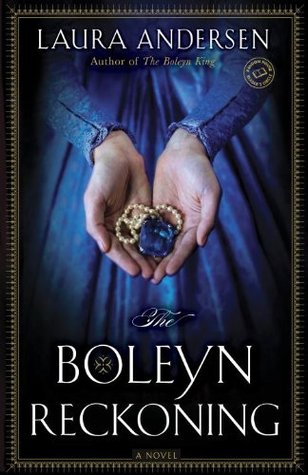 ...where there were kings and princesses and bishops and heretics, there would be trouble. And secrets. And more than enough of both.

The third installment in the "what-if" series about the real Anne Boleyn's imaginary son shocked the bejesus out of me.

I enjoyed the first two, The Boleyn King and The Boleyn Deceit. I loved how there was a murder mystery in the middle of everything and became so immersed in the characters' lives and loves, I was very excited to read this.

I def didn't enjoy this much as the other two though. First of all, there's no real mystery, not like there was in the previous two, and second, this story, the last half anyway, was just full of incredible hate, evil, and brutality. It just became something ugly after the 50% point.

The writing is fabulous; I just don't care for where the author took this trilogy. There also wasn't enough Elizabeth and I grew so very, very frustrated with Min and Dominic and their incredibly stupid decisions. I kept screaming at my Kindle, "Don't admit it! What's one more lie after all this time? You're stupid! Quit hiding this or that, stop trying to please him, to hell with honor. Fight for what you want!" I hated Min this time and thought her tiptoeing around William and all this "I'm torn between two men" crap had just gone on long enough. What she does in the end...ugh. Hell no. Made me want to vomit. Was she just looking for excuse to go from one bed to the other? 'Cause she did herself and Dom no favors.

The fact I was so angry goes to show just how immersed I was though, so in a way, my extreme frustration with the characters is a compliment to the author. She writes a darn good yarn that really sucks you in. As I said above, I just hated how very ugly this got, mostly on William's part and yet a part of me couldn't blame him.

And I'd have liked MORE Elizabeth. As in the other two titles, she was more a background figure and yet she was my favorite character. The fact this one def focused on Min--who'd I came to dislike tremendously--and less on Elizabeth just made it not as enjoyable for me, though the beheadings, wars, secrets, and court intrigue kept me reading long after I should have fallen asleep.

Def a must for Tudor fans if you don't mind how very ugly it gets.

I received a digital galley through Netgalley.