A Question of Death: An Illustrated Phryne Fisher Anthology 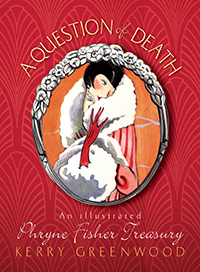 Spill your drink down his shirt. In extreme cases, a fork in the groping hand or a cup of hot coffee in the crotch is a guaranteed distraction.
--One of six ways to discourage the overenthusiastic suitor

The first story (A woman in a hotel searching for her husband) is awful. It's vague; the conclusion is so rapid you don't have time to even guess what it is. There are editing errors. (Only in this edition. The situation is being remedied, I'm assured, by Poisoned Pen Press.)

The second story finally brings into the book the characters we've come to love so much by watching the TV show: Inspector, Dot, Butler... The cases are quickly resolved, but each one tells us some new tidbit about Phyrne.

The second one didn't appeal to me all that much--two men dead, both due to inherit the same estate. The third was more interesting and on top of a case of missing jewelry, we see Phyrne struggle with a marriage proposal. I loved her quick thinking on the case too. And even better, there's a moral in this one. Revenge may feel great...for a moment, but it's not a long-lasting solution. My favorite story has to involve the mentally challenged gardener. I love how Phryne comes to his rescue.

Some of the cases reminded me of some of the episodes in the TV series: a missing football "charm", a woman of possible ill-repute dead in a lawmaker's home, a ski chateau setting, Juana the Loca and college.

Interspersed here and there are cocktail recipes and such and some lovely illustrations. I especially like how each story is on different printed paper. Blue circles, green lines, pink circles... It's very subtle and only visible in certain light. It was a surprise to me when I realized it. The pictures of Phyrne herself seem to get better as the book continues. And of course, Phyrne's delightful conversations are as witty and humorous as always.

I do think, however, that the mysteries could have been a little more fine tuned. I prefer a little time to figure it out on my own, a few hints so I can get to that point. I didn't get that with stories this short. It was just "here's the situation...and oh, here's the solution!" We're told a man pours the soup but we're not told that his hand is discolored until Phyrne announces the case is solved and how she figured it out. We're never given clues to come to any conclusions ourselves.