What Makes a True Warrior? The Truth is Revealed in Warrior of the Egyptian Kingdom by Stephanie Jefferson 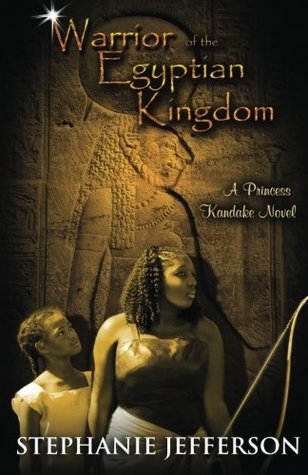 "Protecting lives is what a warrior does. A warrior that is strong never takes a life if there is another choice."

This is the third book in the Princess Kandake series. PK is a Nubian warrior/princess/future queen. Her father has chosen her to rule the throne after his passing, over two brothers. The setting is historical, I'd like to say ancient Egypt times. And in this book, Kandake goes on an adventure to Egypt, a huge task at hand: determine why Egypt is asking for Nubia's help, decide if they really need it, and examine the young prince's ability to rule. Worse comes to worse, she may need to rule Egypt herself one day.

In Egypt, she must stop an uprising, heal the Pharaoh, instruct the prince, and save a young Nubian/Hebrew girl from abuse. All the while she faces Egyptian men's scorn over the fact she has so much power and also argue with idol worshipers that she is NOT Sakhmet, daughter of Ra.

I loved this story. Kandake does not disappoint. Once again she manages to solve everything in the manner of a warrior and future queen and impart some lessons as she does so. And even better, there was very little of Tabiry, her sister in this book. I really really dislike that girl.

Young readers will also get a look into Egyptian and Nubian life and customs. It's a wealth of information imparted in a most entertaining way.

Oooh, did I mention that Kandake chooses her future husband in this one? The romance is minimal and never overshadows the theme of girl power.

I noticed something in this installment, though. Lots of things are repeated over and over, such as her list of suitors and their pros and cons. It was repeated nearly word for word twice in different areas and while I realize this was weighing on her, I already knew one was soothing and one was hard working. The reason this came to annoy me is that it happened quite a bit, the repetition of things/conversations/facts. Also confusing to me was just who solved the problem of the Pharaoh's poisoning? I thought it was Kandake, who tried the poison herself, but later Naomi acts like she has solved it and everyone around her acts like she did too. Again, it felt like repetition. And why did Kandake wait so long to help the Pharaoh?

You can read my reviews of the previous two Kandake books here.

I received this from the author via Smashwords in exchange for an honest review.