The Sweetness by Sande Boritz Berger: A Life Lesson from a Hidden Jewish Girl in WWII 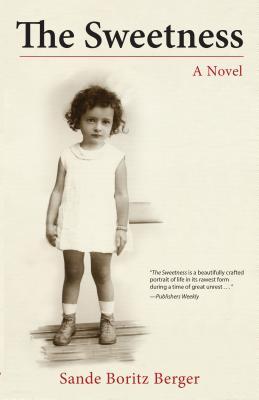 Since I've been here, every day, without realizing, I have tried to find something that makes me happy, no matter how small a thing that might be. Today it was the little speckled bird chirping outside that reminded me that it is nearly spring.

The sweetness is about finding sweet in what's sour, about adding sugar to lemons to make lemonade. It's about finding joy where there is not much to be found. This lesson comes from a young girl (age 8 to 9), who after her parents are massacred by the Nazis, hides in the home of a Catholic woman for the war.

And while this young girl finds pleasure in little birds at the window--'cause really, there's not much else to be found--Mira and her two aunts make a life in New York City.

We have two very different situations here. While that girls hides in the basement with little joy in her life, her Jewish family in America has no clue how good they have it. Oh, they say they do, but the patriarch of the family is such a jerk. He pulls strings to keep the men out of the war, when it's his own people they'd be fighting for. He worries about money when he has more of it than he needs, while his own people starve in camps. He just controls things constantly--in his daughter's and his sisters' lives.

And I'm sad to say that was the majority of the book--him and his daughter, Mira, who I really liked until she got married and threw her dreams away. Every now and then the story strayed to the older sisters/aunts and one of them was just...well, she went through trauma after trauma and in the end after surviving much and finally getting married--which she wanted above all else--she still couldn't get right in the head and I am left wondering what the point of her story was.

I also didn't care for the narrative of the American stories. It was third person and all telling, no showing. The author did a much better job with Rosha's story, which was in first person and allowed myself, the reader, to actually live in the story for a bit...a very brief bit. As I said above, Rosha's parts are VERY FEW and in the end it hurt the story for me. By the time the story ended, while I appreciated the lesson Rosha imparted in such a brief time, I was tired of her American family, of reading about their everyday lives and problems and their attitudes. And I was BORED. I don't want or need pages TELLING me about Mira's wedding.

A miss for me, but I thank Netgalley for the chance to read it.