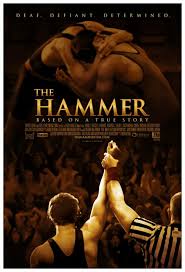 When I find a deaf person that I feel is an inspiration to me, to others, to deaf and hearing alike, I talk about them. I recently watch a movie, The Hammer. It's about Matt Hammil.

In the beginning, the movie shows him as a baby in a sound booth. The beeps and tones continue and he doesn't hear them. The audiologist stops the test. The grandfather says, "After a couple of flashing lights and a teddy bear, you're going to tell me my grandson is deaf and dumb?"

"No. After a couple of lights and a flashing teddy bear, I'm going to tell you you have a highly intelligent grandson is profoundly deaf."

I don't think his grandfather ever used dumb with deaf ever again, because Hammil became a state and college wrestling champion. The movie goes on to show us him getting made fun of in school, learning to fight back the only way he could as at the time nobody was teaching him to communicate properly: his fists.

He has a botched prom. He goes to Purdue and that doesn't work out. He reads lips; they think he signs. This happened to me when I attempted college too. I said, "I'm deaf. I need a way to hear the teacher."

They said, "We'll get you an interpreter."

Do you think a busy college professor is going to make sure I can read his lips? Nope.

I saw my life paralleled in so many ways. Nobody wanted to date the different boy. People spoke to him like he was retarded. People wondered why he was so quick to defend himself. I'll tell you why: Cause we can only take so much abuse before we come to the realization we have only ourselves. So when Hammil gets to RIT, he doesn't understand the meaning of teamwork. 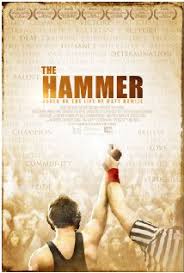 He's never been on a team. In a world of people laughing at him, bullying him, he learned to rely only on himself. I see this in me too. When the Deaf community accepted him, they told him not to use his voice. He at one point sorta says to his girlfriend, "Let me be me." (not a direct quote from the movie) So in a way, he struggles with BOTH worlds and fits fully in neither.


Some things will never change. Those seven kids that bully that deaf kid on the playground just because he/she is different...it doesn't stop with adulthood; it's just done with words instead of fists.

But Hammil overcame it. He went on to Ultimate Fights, won a gold metal in freestyle fighting in Deaflympics.

This movie was so inspirational. It touched me in so many ways. If you are looking to be educated, entertained, touched, inspired, this is for you.