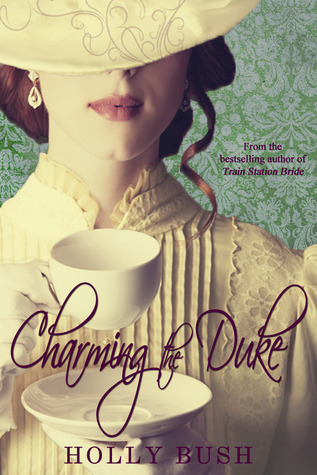 I broke my "no dukes, no rakes, no rogues" rule and read this novel the last few days. I was drawn in by the cover and the author's solid reputation for being talented.

Being a huge Downton Abbey fan, I was pleasantly delighted by the Dowager in this story. Every time she spoke or tapped away with her cane, I pictured the Dowager, a delicate, aged eyebrow arched, as she looks at whomever she's speaking to as if they're an imbecile...and in this case, they rather are.

The main story follows Matilda, the middle child of a well-to-do family with no interest in marrying. Instead, she wishes to open an orphanage and sets about doing just that... Meanwhile, a handsome duke seeking a wife falls (against his own wishes!) for her. They argue incessantly. There's scandal, scorching kisses, more arguing, rumors, more scandal...

Soon the entire family is involved in some way with the so-called scandal or with attempting to convince the Duke and Matilda to marry.

And as I said above, for me the Dowager just took the cake. She is by far the most delightful character in the story and kept me laughing. And I love a good laugh, even more so when I'm not expecting it.

Someone put together a YouTube video of Sh!t the Dowager Countess Says. It's not cc'd, but I have watched the show with captioning and can remember very well some of the things she has said. While I'll share that video below, I'll also share some "sh!t" this Dowager Countess says.

"That's what a good coupling will do for a dried-up old maid like Athena Wilcox."

"I see the way you and my son look at each other. Miracle the chandelier in the room under your bed hasn't fallen from its holding."

"High time you had this conversation with your other two daughters, Frances (about coupling). Juliet will undoubtedly tie a bow about her husband's rod the first time she's it."


As you can see, I enjoyed this "charming" story. It's lighthearted, funny, and we all need a read like that every now and then. My only quibble? It keeps its distance from the characters. You always feel as though you are watching them, not living within in them. There's not a lot of emotion coming from the characters, even though we know they're arguing and whatnot.

I won this on Goodreads Firstreads.