The Rise of Zenobia: Only The Beginning of a Spectacular Life Story

I have a strong interest in Zenobia, the ancient Warrior Queen of Palmyra, Syria.  I'm not interested because she was a queen, and I don't care about her being a descendant of Cleopatra.  My main interest is that Zenobia rebelled against the Roman Empire.  That's why I entered a giveaway on the Historical Fictionistas group on Goodreads for The Rise of Zenobia by J.D. Smith. 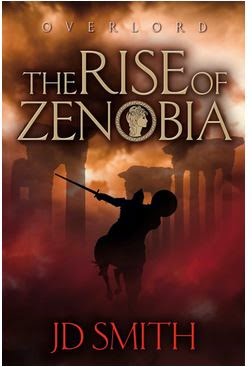 I knew from the summary that the central character was not Zenobia.  He was a male relative of hers named Zabdas.  Zabdas was well portrayed, but the most dramatic event that had happened in his life occurred before the novel began.  I also noticed that he's a go with the flow kind of guy who lets others make decisions for him.  Maybe it's because he spent so many years as a slave.  He may resent those decisions, but he doesn't resist them.

Zenobia refuses to just go along.  When the Kingdom of Palmyra is in jeopardy from a massive invasion  she does what she can to prevent it.  The trouble is that she seems to get whatever she wants.  I felt that this lessened the suspense to a very great degree.

The other problem is that this is book one, and it doesn't cover the aspect of Zenobia's life that really interests me.  So I liked it, but my enthusiasm was limited.  It seems likely that I will prefer the second book.