Manroot: A Novel of Rights and Wrongs

Manroot by Anne Steinberg is not a new work.  According to the About The Author notes, it was Steinberg's debut novel originally published with acclaim in the UK in 1994.  I am reviewing a 2014 edition of this novel.  I received it as a gift from the author in return for an honest review. 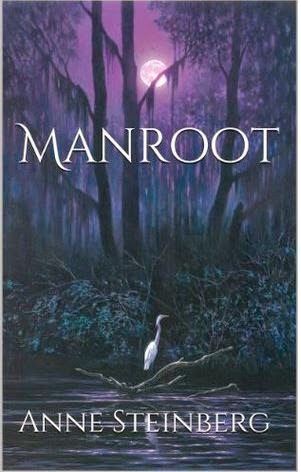 The cover has been praised as being atmospheric.  It is indeed, but if this cover had been the only thing I knew about Manroot before I read it , I would have assumed that the book took place in the vicinity of some haunted Louisiana bayou. I would have been wrong.  The events of Manroot take place in the Ozarks over the course of a thirty year period beginning in 1939.  Steinberg fast forwards from the 1940's to the 1960's which allows her to display social change and radical differences in values.  That's why I shelved it on Goodreads as historical fiction.  It isn't historical in the sense of dealing directly with major historical events, but it does describe the way people lived and thought in two distinct eras.

Others have shelved and reviewed this book as a romance.  When I look at the predominant content of Manroot, I don't have that impression.  There was a brief romantic interlude which reminded me very much of the similar interlude that took place between Hester Prynne and Arthur Dimmesdale in The Scarlet Letter by Nathaniel Hawthorne, but the consequences were much worse for Manroot's protagonist Katherine  Sheahan.  She was a despised "half-breed" who was already stigmatized before she fell in love with a married man.

From the perspective of 21st century readers, it is difficult to understand how Katherine managed to pick herself up and go on with her life after the terrible events that transpire in the town where she had her short-lived romance.  We wonder why she isn't angry or paralyzed by trauma.  The answer is that both responses would have been luxuries in her situation, and Katherine was a survivor. Survival mattered more to her than justice.  She was also a gifted healer who was fully capable of healing herself.

I agree with those reviewers who really liked the herbalism aspect, but it's not a source of high drama.  No one wanted to draw and quarter Katherine for providing an alternative to the treatments of medical doctors.  In fact, her skills in this area are the main reason why she was accepted.  I especially enjoyed seeing the increased interest in her herbalism in the 1960's.

The source of Katherine's herbal knowledge was her Navajo grandmother who isn't really shown in the novel, but she may have been like the Navajo herbalist elders of the Plant Watchers Society in the Aimee and David Thurlo mystery, Plant Them Deep.

The trouble is that Katherine's behavior is contrary to the beliefs of traditional Navajos.  Those who have read Tony Hillerman and the Thurlos are aware that traditional Navajos avoid contact with the spirits of the dead who are called chindi.  Find out more by following the link I provided to the Wikipedia article on the subject.  Let's just say that avoidance isn't Katherine's strategy.  It seems likely that this could be offensive to some Navajo readers, but spirits provide the paranormal aspect of the novel.  The paranormal content doesn't become dominant until fairly late in Manroot.

Skeptics who are determined to find an alternative explanation for the resolution of this novel can probably find one.  Yet if we accept Katherine's version, then it raises a number of questions.  Should we judge actions by their consequences, or are there actions that are always wrong regardless of their context?  Could Katherine have deceived herself into thinking her actions were justified?  Are those who considered Katherine insane correct?  I leave these matters up to the individual reader.

This book is full of both darkness and light.  I found it absorbing, well-written and troubling.  I don't recommend Manroot to people who prefer comfortable reading that doesn't ask disturbing questions.  I do recommend it to people who like their fiction to be memorable.