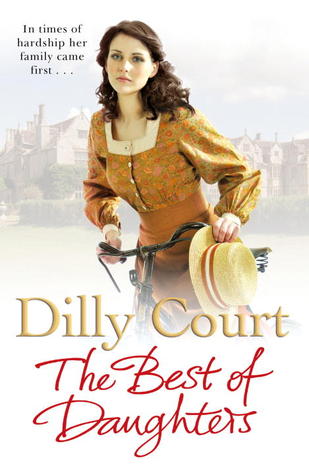 I'm not fond of Lady Mary. I think she's uptight and makes choices for the wrong reasons, but that doesn't deter me from watching and thoroughly enjoying Downton Abbey. Just like my unsure feelings of this heroine, Daisy, didn't deter me from enjoying this novel.

It's the eve of WWI and Daisy, the daughter of wealthy parents fallen on hard times, is trying to decide just who she is. The world is changing. She must change with it.

There's only one servant throughout the story, really, so the novel is missing that strong DA feel as far as mingling with the hired help and there were no side dramas with them we could get really lost in. No Bates in jail, no Anna being raped, no housekeeper with breast cancer.

The one girl, Ruby, does get into some trouble though, the kind you'd expect back then. I won't get into it.

Ruby and Daisy also develop a friendship that starts in their suffragette days. And here is one of my big disappointments: the blurb promised me a suffragette or at least made me feel I would get some suffragette story. It's only in the beginning of the story and is such a small amount, it doesn't feel worth mentioning. I feel a bit ripped off in that aspect.

I liked Daisy sometimes, and others she just plain confused me. Perhaps that's supposed to be, as she seems confused by herself and her feelings as well. What is this strong attraction she feels to a cad? Does she believe in dividing the social classes? She says no, but her actions and snootiness often say yes.

She's afraid of the sight of blood, yet joins the First Aid Nursing Yeomanry. She passes out in the butcher shop, yet assists a girl having a stillbirth with no trouble. Um...you see my point? She confuses me.

Disappointment number two: I did not know about the FANYs and was excited that this novel brought them up. It was an all-female unit that participated in intelligence work and nursing during WWI. During the war, they drove ambulances and ran hospitals and clearing stations. I guess they were somewhat like our Red Cross.

I had hoped the book would get into this further, that we'd have actual scenes of this part of Daisy's life, but instead, the novel glosses over these bits quickly, tells in about four pages that she did this and that, readied a hospital, tended the wounded, wrote letters, remained unscathed after everyone around her contracted dysentery, drove an ambulance, etc. There was so much that could have been a story on its own, but instead the author chose to focus the actual scenes on Daisy's imagined romance with a cad, her maid's stupidity, and Daisy's engagement to her childhood friend. The FANY stuff was just told to us as quickly as possible.

...but she had glimpsed a different way of life and made new friends and found it unsettling in the extreme.

But it still an enjoyable read as Daisy grows up, deals with her snobby mother, struggles to keep her family fed and cared for, and makes decisions that are right for her in a changing time. Long review short: I wish the first half had been chopped up a lot and the last half made more of a story on its own. I could have done without that Bowman (the cad) dude entirely. Less Bowman drama, more FANYs would have made me a happy reader.

I loved the ending though, very much.