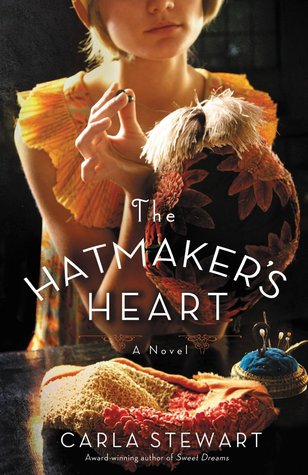 This was a huge disappointment for me and normally I don't waste my time reading books I don't think I'll enjoy, but I kept thinking and hoping this heroine would grow a backbone (before the 95% mark) and thus, be in my opinion a good read. But this did not happen.

It had a lot of interesting side stories: the stuttering, the death of her grandmother, the fashion industry of the twenties, a royal wedding, but frankly it didn't all quite tie together.

It kept me reading, however, even though at 65% I was ready to throw my kindle against the wall because I could not fathom a girl could be so stupid and blind, so spineless. Does she buck up in the end? Yes, but too little too late for me.

There's no romance here. I am not sure if this is being marketed as one, but I know many will expect one. There's not. While this heroine has two men interested in her (one NOT for the right reasons, so I hesitate to say romantic interest), she only pines for a boy she grew up with and he doesn't really have an actual role in the gist of the story.

The 411: Nell left England because her father and grandfather had both passed on, leaving the estate to her uncle. She's now an apprentice to a man named in Oscar and she makes hats, becoming the sensation among young ladies in both NY and England. But her boss sexually harasses her constantly and ridicules her every chance he gets. And she just takes it...endlessly. And this is why I grew very tired of the story.

I really enjoyed the look at the fashion industry of this time though and I found myself wanting to learn millinery myself, so I did get something out of it.

Though marketed as a Christian fiction, it is NOT preachy, at all. You wouldn't know this was even with a Christian publisher if they didn't pray every now and then. There's all of maybe one Bible verse in the whole book. So for those not into being preached at, no worries.