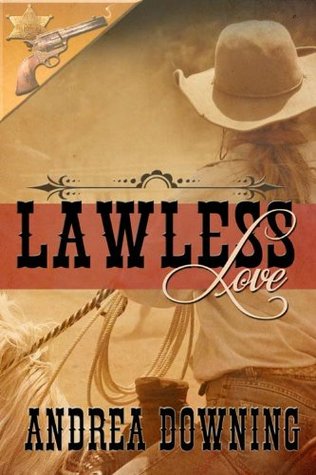 Tara: Welcome. You’re here to promote Lawless Love, a western historical romance. Tell me, please, what was the inspiration behind this story? How did it come to you?

Lacey Everhart has carved out a tough existence in the wilds of 1880s Wyoming, working hard to build a secure life for herself and her younger brother, Luke. She will stop at nothing to protect what's hers and keep them safe. Even if it means keeping a secret that could destroy their lives.
Marshal Dylan J. Kane is a man who considers everything as black and white, right or wrong. He's never seen life any other way until he sets eyes on Lacey. Suddenly the straight and narrow that he's followed has a few twists and turns. Loving Lacey offers the home life for which he hankers...but can he really love a woman who seems to be plain lawless?


Andrea: Tara, thanks so much for having me here. I appreciate the chance to tell you about my novella. My publisher, The Wild Rose Press, had started a series called ‘Lawmen and Outlaws’ which I thought was right up my alley. Shortly after that, I was staying on a working cattle ranch over in Nevada and met a young cowboy by the name of Dylan Kane. We joked that, that was the perfect name for a hero. Things sort of evolved from there.

Tara: I have to agree with that. That's a very sexy cowboy name. Tell me, was he hot? LOL If you're married, I'll give you a pass on that question. *winks* We focus a lot on heroines here on Book Babe. Tell me what makes your heroine strong.

Andrea: My heroine, Lacey Everhart, has been forced to bring up her younger brother on her own and she’s managed to look after him while making a living and getting a boarding house business together. She’s put up with a number of men trying to take advantage of her and, when the story begins, she is also trying to deal with some horrible circumstances—can’t tell you, obviously, as it would be a spoiler. She’s definitely strong, feisty and no-nonsense and will do anything to protect herself and her brother.

Andrea: I’d like to believe I’m a strong woman, certainly. As a mother, I would naturally do anything to protect my offspring and, needless to say, I wouldn’t put up with any unwanted advances from men! Uh, anyone out there want to try, though, I’m willing to see what happens…

Andrea: I’d like to think men would find Lacey sexy because she knows her own mind and doesn’t stand for any bull. She knows right from wrong and, although some of her actions fall into a grey area, she acts on her instincts.

Andrea: I have to admit this little novella didn’t require an awful lot of research. It takes place in Wyoming, an area I know reasonably well. But I did have to research the law regarding whether a spouse can ever be forced to testify against his or her husband or wife, and it surprised me to discover that information known prior to the marriage must be divulged in court. Previously, I had believed all information between a couple was confidential.

Tara: Wow. I didn't know that either. Interesting.

What would you like readers to gain from reading your book? Is there a strong moral? Do you hope they will laugh, learn something, ponder a point?

Andrea: Well, of course the main thing is that a reader should be entertained and enjoy the story—that comes first. I don’t really write with a moral in mind but, if I did, I would like the reader to go away thinking about the grey areas in life, how something illegal, or otherwise normally considered immoral, can, under certain circumstances, possibly be the right thing to do.

Tara: Now let’s talk about your hero. What draws the heroine to him? Is he based on a real man in your life by any chance?

Andrea: Dylan Kane has taken his name from a real life person but not his personality! He doesn’t have any trait I’ve ever come across because I think he is a man of his time, when people really did see things more black and white. Although, having said that, maybe he has a bit of all the lawyers in my family—after all, the law is a clearcut institution; it says what is right and what is wrong & doesn’t allow for any grey. Dylan encounters grey, and that is what makes him human, his confusion on how to handle that. I think Lacey, the heroine, is drawn to him because of his morality and his desire for a homelife; she’s seeking someone steadfast in her life for both herself and her brother and Dylan is nothing if not steadfast.

Tara: Your book takes place in Wyoming. If I were a tourist, what would you recommend I see in this state?

Andrea: The one thing everyone goes to Wyoming for are the 2 national parks: Yellowstone and Grand Teton. Yellowstone, of course, is known for the geysers like Old Faithful and Grand Teton is known for the beauty of its scenery, the mountains and lakes. The opening scene of Lawless Love takes place at a bend in the Snake River, which I envisaged as Oxbow Bend, a lovely place within the Grand Teton Nat’l Park where a lot of wildlife gather.
Tara: A more personal question. What’s the one thing you hope to accomplish before you die? Your main goal?

Andrea: I take it, Tara, you mean something other than living to see my daughter get married and have my grandchildren, which would be my primary concern. I’d love to write one really successful book; I’m talking NYT bestseller sort of thing. However, I won’t be holding my breath for it—I’m quite happy having got 2 books out and another 2 on the way, with yet another in the working stage.

Tara: I’m a dog mom, so I always ask this. Do you have pets?

Andrea: Sorry Tara, no pets at the moment. When my daughter was growing up we did have Belinda Bunny, but she passed on to that great carrot field in the sky. We also had 2 horses, Saygo and Amber, but that was when I was living in Britain and they had to be sold off when my daughter got too busy—or maybe when she discovered boys! I’d love to have a dog but I think it would be unfair to the poor thing as I travel a great deal and have no one to look after it…

Thanks again for having me. I’ve enjoyed doing this interview and celebrating Lawless Love’s first birthday with you!

Tara: Thanks for joining us today, Andrea, and happy birthday to LL!

Andrea Downing likes to say that when she decided to do a Masters Degree, she made the mistake of turning left out of New York instead of right to the west, and ended up in the UK. She eventually married there, raising a beautiful daughter and staying for longer than she cares to admit. Teaching, editing a poetry magazine, writing travel articles, and a short stint in Nigeria filled those years until in 2008 she returned to NYC. She now divides her time between the city and the shore and often trades the canyons of New York for the wide open spaces of Wyoming. Loveland, her first book, was a finalist for Best American Historical at the 2013 RONE Awards. Lawless Love, a short story, came out Sept., 2013 as part of The Wild Rose Press ‘Lawmen and Outlaws’ series, and is a finalist for Best Historical Novella at the RONE Awards. Two further books are currently in edits and a third is on the computer.