Life Upon the Wicked Stage: A Guest Post from Author and Former Actress Beth Matthews #Giveaway

As I'm fond of saying: in my misspent youth, once upon a time, I was an actress. And it was a whole lot of fun. Amongst other things, I met my future husband when we did A Midsummer Night's Dream together many years ago. (He was the sexiest damn fairy you ever did see. ;P).

My experiences on that play and others definitely helped inspire me to write MIDSUMMER NIGHT'S FLING, which is very loosely inspired by my own real life romance. For instance, there's a moment where the hero accidentally bangs the heroine's head into a wall backstage when they're kissing. That happened to me in real life during a show. And, yes, we were kissing. ;P

That's the way it is, though, even in the best productions, stuff still goes wrong. That's part of the magic of live theater isn't it? Anything can go wrong? And does. But, as an actor, you still have to roll with it. The show must go on!

I had a moment like this playing Mrs. Cheveley from Oscar Wilde's An Ideal Husband once. I was supposed to take off my brooch and plant it in the cushions of a chair. And I was supposed to do it in such a way that the audience wouldn't notice. AND I was supposed to be acting and delivering lines at the same night. Well, most of the time it went all right, but one night the brooch got caught on my glove. So there I am, trying to deliver my lines while, meanwhile, I'm trying to unhook the damn prop from my glove without being obvious about it. And, what do you know, as soon as I got it unhooked from the one finger it got stuck to the other! Can't win. 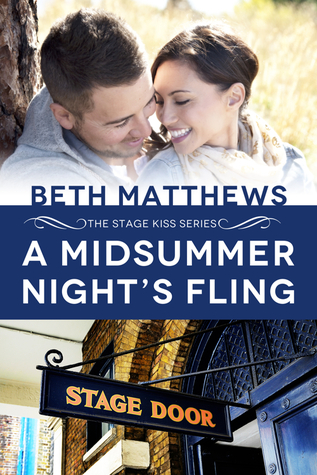 Worse than a prop malfunction, though, is when another actor leaves you hanging. I was in a crowd scene in Macbeth once. The curtain was down and all of us assembled to take our places. As planned, the curtain rises and the actor playing Duncan is supposed to make a grand entrance. Well, the curtain rose…but no Duncan. And he had the first line of the scene! Those of us onstage improvised furiously and finally the actor showed up, but it was pretty tense for a minute or two. And all of us who'd been trapped onstage were nearly ready to kill the guy when we found out he'd fallen asleep backstage and that was why he'd missed his cue!

When you're in front of a live audience things can get tense or tragic, but it's always fun. There's a special sort of magic to live theater that you can't capture anywhere else, and that is just one of the things I tried to capture in A MIDSUMMER NIGHT'S FLING.

After dating her childhood sweetheart Max on and off for years, aspiring actress Nicola Charles is finally ready to move on. It’s time for her to focus on her stage career and stay away from Max–before he can break her heart again.

Max regrets hurting Nicola, but he wants another chance. So when his play loses its leading lady, giving Nicola the part seems like the perfect opportunity to win back his old flame.

But the course of true love—and a theater production—never do run smooth. As Max fights to reignite Nicola’s love, the onstage antics can’t rival the bedlam backstage: a neurotic cast, a prickly crew, and an evil diva of a director who’s got designs on Max.

As Nicola and Max battle to keep the drama onstage, Max can’t help wondering if their romance will end with the last performance. Or have the two of them finally captured what they’ve dreamed of all their lives? True Love.

Beth Matthews is a Southern California girl, born and raised. She’s a total geek, a movie buff, and a mediocre swing dancer. She lives in sunny SoCal with two of the neediest housecats on the planet. She also does freelance editing on the side if you’re an indie author looking for someone to read your books.

Or, you can just email her at:
beth.matthews.books(at)gmail.com

GIVEAWAY TIME!!! LEAVE A COMMENT BELOW WITH YOUR EMAIL ADDRESS FOR YOUR CHANCE TO WIN A DIGITAL COPY OF A MIDSUMMER NIGHT'S FLING. JUST TELL US, WHAT'S YOUR FAVORITE SHAKESPEARE PLAY? OR EVEN BETTER, HAVE YOU ACTED YOURSELF AND PERCHANCE HAVE A FUNNY STAGE MISHAP TO SHARE?

Winners will be chosen randomly on August 8th and will be contacted via email. He or she will have 48 hours to reply or a new winner will be chosen.