I'm not embarrassed to admit that I liked Ninth Ward which was Jewell Parker Rhodes' Hurricane Katrina novel written for children.  I recently discovered that she had written another children's novel called Bayou Magic which deals with important themes.  It also has a beautiful cover. 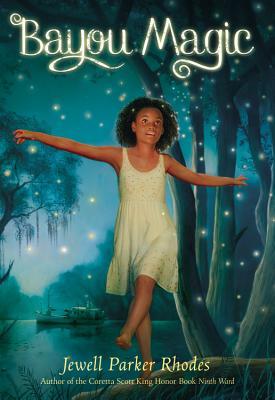 Maddy was a ten year old from New Orleans who went to spend the summer with her grandmother at Bon Temps Bayou.  Her grandmother was an herbalist. She also carried the history of her maternal line going back to the ancestress who came from Africa accompanied by the spirit that she worshiped.  This spirit is known as Mami Wata.

I had heard of Mami Wata but knew very little about her.  I was under the impression that she had originated in  Benin like the spirits known as the Loa.  The Loa are the spirits of Voodoo.  Jewell Parker Rhodes had been writing about Voodoo in a series of novels for adults.   Yet Mami Wata wasn't originally part of the Voodoo pantheon.   Her origin is definitely West African, but I don't see any evidence that she came from any particular place.  One theory is that she actually began as The African Manatee who is apparently called Maame Water.  I think there's a chicken and egg problem there.  The African manatee could have been named after the spirit who was already being worshiped in ancient West Africa.

I got to know Mami Wata a bit better through the eyes of Maddy in Bayou Magic.  Maddy was the first in several generations of her family to see and speak to Mami Wata.  At first Maddy thinks it's "only a dream", but dreams are important in African traditions.  It's one of the ways that spirits can communicate with human beings.

Although Maddy's grandmother never saw Mami Wata herself, I was impressed with her wisdom.  When Maddy told her that she wanted to be a hero, her response was "To be a hero, bad things have to happen."  Maddy's grandmother also sensed that bad things were indeed about to happen and that Bayou Bon Temps was in jeopardy.  The approaching disaster turned about to be very real, and a massive disruption of the environment of the entire region.    How could a ten year old have any impact on such a cataclysm?  Maybe she could with the help of magic, and a certain West African water spirit.

So  age old religion collides with contemporary environmental concerns, and a little girl does have a chance to be a hero.  I loved it.   I'll definitely need to catch up on Jewell Parker Rhodes novels that I've missed.