Safe At Last - A Second Chance at Love Story by @maya_banks 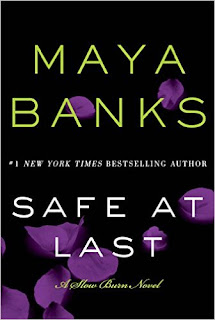 Safe At Last is my favorite in the Slow Burn Series so far. I really enjoyed book 1 and book 2 was a miss for me, so I was a little nervous going into book 3. I read this book in an entire afternoon because I needed to know everything that was going to happen and how this story would end. Second chance love stories are a favorite of mine, and this was one of those stories.

Zack, who we've met throughout the first two books, has never been able to get over a girl. Twelve years ago she just disappeared on him. He searched and searched, worried she was dead. Until one day a client hires him and he comes face to face with Anna-Grace, aka his Gracie. Only she HATES him for something he did to her, and he has no idea what.

We've been following a group that has been targeting this family in the series, and that group comes into play when they beat Gracie to a pulp, which gives Zack his time to swoop in and try to fix things. As this story unveils and we learn what Gracie thinks that Zack did, I was on the edge of my seat to see how he would prove to her he had nothing to do with it and see her finally let go of the pain from her past.

Even if you've not read the first two in the series, you can still read this one and be able to follow along. I really, really enjoyed this story and hope that Maya Banks is going to continue the story with characters she has introduced. I'm hoping Eliza gets a story soon.

They say young love doesn't last, but a girl from the wrong side of the tracks with unique abilities and the hometown golden boy were determined to defy the odds. For Zack Covington, Anna-Grace—his "Gracie"—was the one. But one night forever altered the course of their future; when a devastated Gracie disappeared without a trace, Zack was left to agonize over what happened to the girl he loved. As the years passed, his desperate efforts to find her uncovered nothing.

Now working for Devereaux Security, he stumbles across a painting featuring a special place only he and Gracie would know. The image is too perfectly rendered for it to be coincidence. His Gracie must be alive. When he comes face to face with her, he is shocked—and heartbroken—to discover the wounded shell of the girl he once knew and still loves. Her psychic gifts are gone, and worse, she believes he betrayed her all those years ago.

Zack has enemies, and once his weakness is discovered, Gracie becomes a target for revenge. He'll have to save her before he can earn her trust and her love. And he vows they'll never be torn apart again.