If I read an award winner or nominee, it's usually a remarkable coincidence.  I don't read books because they've been nominated for awards.  I've learned from experience that award winning books are rarely the kind of books that I want to read.  This applies to award nominated mysteries.  I don't care for the extremes in the mystery field--noir and cozies.  The awards are dominated by these polarized trends , and I prefer my mysteries somewhere in between.   I want realism, but I don't want the deep despair of noir.  I like sympathetic protagonists but I don't want the saccharine sentimentality that I find in the mysteries that are marketed as cozies.

Invisible City by Julia Dahl was nominated for an Edgar in the first novel category.  It's somewhat grimmer than the mysteries I tend to like, but I was intrigued by the background of the protagonist, reporter Rebekah Roberts. 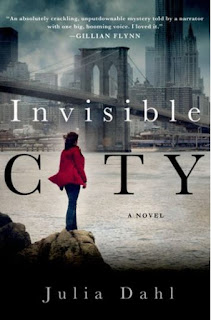 Rebekah was brought up by her Christian father, but her mother, Aviva Kagan,  had come from the hasidic Jewish community and left it behind. Apparently, she was ambivalent about this decision because she soon left her daughter behind as well.   Ambivalence about my Jewish heritage is a situation that I identify with and understand.

The hasidic community call themselves haredi.  This literally means "those who fear" in Hebrew.  The implied connotation is that they are those who fear God. Yet it seemed to me that Dahl does portray haredi as generally fearful.    Their distinctive 19th century Eastern European dress makes them the most visible Jews and a special focus of prejudice.  Prejudice is catalyzed by fear of what is considered strange and unfamiliar.  Closed off communities like the haredi tend to cultivate their unique identity as a survival strategy. So the haredi are insular because they are afraid of the outside world, but those in the outside world who are most inclined to attack them are afraid of how different they are as a result of their insularity.  Fear begets more fear.  Fear was the reason why the haredi tried so hard to conceal murder in this book.

Invisible City centers on the killing of Rivka Mendelssohn which might easily have become an anonymous crime statistic in New York City.  The victim was a warm outgoing woman who wanted to help people.  She also strongly supported the rights of individuals to choose how they live and what they believe which ran completely counter to the haredi ethos.

There were a number of  characters in this book who were alienated by the lack of freedom among the haredi.  The most indelible are Rivka Mendelssohn and Aviva Kagan who never actually appear, but are nevertheless vividly portrayed through the memories of the people who knew them.

Saul Katz is another of these disaffected characters, and he is very prominent within the storyline because his community contacts were invaluable for Rebekah Roberts.  In fact, without Saul Katz Rebekah wouldn't have gotten anywhere with her efforts to find out the truth about Rivka Mendelsson's death.   Saul is a compelling character, but Rebekah's unquestioning trust in Saul shows her naivete.

Frankly, I didn't think much of Rebekah.  I'll grant that she's young and new to journalism. Yet I wondered how it was even possible for her to become a stringer for a newspaper in a major market which would be highly competitive.  She should have needed to start her career in a smaller market like Oshkosh or Juneau. She also made mistakes that even a beginner shouldn't have made.  Having anonymous sources that need to be protected is one thing, but having anonymous sources because the reporter forgot to ask who they were is just incompetent.  I can understand why the author chose  Rebekah as the viewpoint character.  So much information that readers might need to know had to explained to her.  Yet she totally lacked professional credibility.   She does learn from her mistakes and presumably will be much improved in the sequel.  In Invisible City, I didn't find her interesting and wished that I was reading her mother's story rather than hers.

Still it was a good mystery.  I kept reading because I identified with Rivka Mendelssohn, and wanted to see justice done in her case.